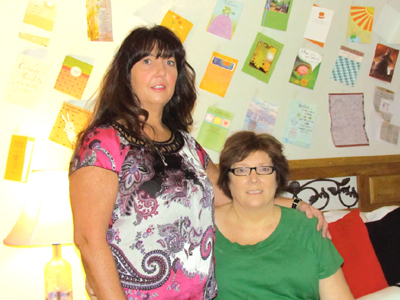 Glancing around the room in her Royal Palm Beach home, breast cancer patient and H.L. Johnson Elementary School teacher Tracy Milbee sees more than just the cards on the wall — she sees an avalanche of support and encouragement.

One card written in pencil catches her eye. It reads “Alex” in big letters. “That one’s from one of my students,” Milbee said proudly.

The cards, which come from all over the country — Iowa, Illinois and Texas, to name a few states of origin — and from people Milbee doesn’t even know, take up two walls of the bedroom that she shares with her husband, Rob. “They keep coming in,” longtime friend Dawn Fresch said.

As each card arrives in the mail, Fresch tapes it neatly onto the wall. “I started putting them in the living room,” she said. “But as more came in, I got the idea to tape them to the wall in her room.”

When Milbee began receiving cards with monetary gifts, Fresch set up a special account at TD Bank for donations under the Tracy Milbee Cancer Fund.

All this stems from a social media campaign launched by Fresch to support her friend.

The idea was to get people, even complete strangers from around the country, to send Milbee cards. Fresch started by word of mouth and then created a Facebook event. Then she made a page, Cards of Encouragement for Tracy Jolly Milbee, alerting friends and family about Milbee’s cancer diagnosis and telling of ways to support her and spread the word.

“With the Internet, we don’t seem to send cards anymore,” Fresch said. “I thought it would be very encouraging if she could go to the mailbox and get a card, sent by anybody, it doesn’t matter who, so long as they were thinking of her.”

Milbee has been receiving cards since September, when she found out that her cancer had metastasized to her liver. Milbee’s battle began in June of last year, when she was first diagnosed with breast cancer. Ever since then, she has been in a constant effort to fight the disease.

Within a year, Milbee underwent six months of chemotherapy, a double mastectomy, and two and a half months of radiation — all while working at the elementary school. “She never stopped, she kept going, even though she was getting the highest form of chemo,” Fresch said.

By late August, everything seemed to be going fine, and she was even scheduled for reconstructive surgery in September. But then Milbee began to experience terrible pains on the side of her stomach.

“I was at school that day, and I thought I was having an appendicitis attack,” she recalled.

Fresch took Milbee immediately to the emergency room, and the doctor ran some tests. “That’s when they discovered the cancer had metastasized to my liver,” Milbee said.

The news of this aggressive and rapidly growing cancer was extremely devastating for Milbee and her family. “Before, there was an end, and it’s not that way this time,” Milbee said. “Now I’m on chemo indefinitely, and they told me it could be years.”

Due to the large tumors on her liver, Milbee’s cancer has become incurable, but can be managed.

Fresch has been by Milbee’s side throughout the entire process. Both originally from North Carolina, they have been friends for more than 30 years. “I moved down here first,” Fresch said. “But we always remained extremely close.”

Six years ago, when Milbee’s husband Rob got an opportunity to work in Florida at his dream job building golf courses for Jack Nicklaus Golf Course Designs, the family moved to Royal Palm Beach. Milbee, who has always had a knack for teaching, joined the staff at H.L. Johnson as an EBD (emotional behavior disorder) teacher.

She has built a special relationship with her students. “When you finally feel the connection with the students, it’s a great feeling and fun for everybody,” Milbee said. “They care about me just as much as I care about them.”

After five years of working at the school, Milbee has also developed a special connection with other staff members. “They are all amazing and very supportive,” she said.

Milbee has a great passion for her job and students and hopes to get back to work. “Once my chemo is over in January, I’m hoping to go back even part-time,” she said.

Her fellow teachers have been supporting her every step of the way through cards, letters, gifts and, most importantly, giving up their sick days so she would not lose her insurance.

“I ran out of sick leave, and the school allowed for the teachers to donate their sick days to me,” Milbee said. “Everyone was so generous and kind, and I ended up with over 800 hours of sick days.”

Some teachers and staff at H.L. Johnson also helped pay for plane tickets for her son Ben to visit her from college. “He’s on a baseball scholarship at Montreat College, in North Carolina, which is his dream,” Milbee said. “We were not able to bring him home for fall break because we had just got back from M.D. Anderson, the cancer hospital in Houston, Texas.”

Another fellow teacher has already paid for Ben’s plane ticket to come home for Christmas.

“It’s amazing to have that kind of support,” Milbee said. “I know that there are lots of people who are sick that don’t have this kind of support, and I can’t imagine how hard it must be for them.”