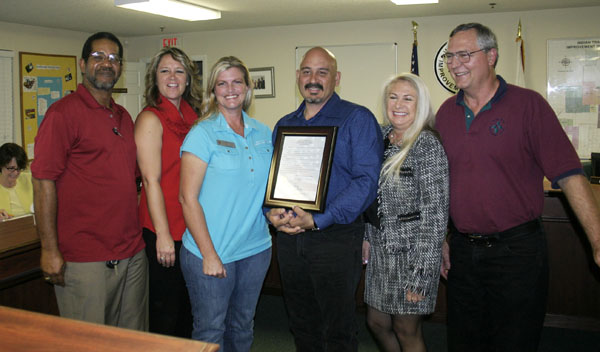 The Indian Trail Improvement District Board of Supervisors reaffirmed its intention Wednesday to purchase a new $180,000 road grader to replace one in need of almost $30,000 worth of repairs.

ITID President Jennifer Hager, who had voted against the purchase at the board’s previous meeting, acknowledged the need to purchase a grader eventually.

“I was opposed to the purchase of a new grader only because I feel strongly that we should take better care of what we have,” she said. “We should try to keep our equipment working through better maintenance.”

Dunkley also wanted the district to keep equipment longer by having district workers paying more attention to maintenance and repair, rather than replacement.

“We need to refocus on the money we can save on fixing this old equipment and start building a repair shop so we can keep stuff in-house,” he said.

Dunkley said that he thought a record of repairs and maintenance history should have been brought to the board so the supervisors could analyze the situation better.

“This is not cost-effective,” he said, pointing out that such equipment in the Caribbean lasts 20 to 30 years. “This is not like a pair of old shoes where we can throw it away and buy a pair of new shoes. We could take the money that we save with in-house repairs and invest it in something else.”

Dunkley also criticized the fact that the new purchase is of a John Deere grader when the district’s fleet is Caterpillar equipment.

“You don’t change from the Caterpillar and have one odd piece of equipment,” he said. “It’s hard to interchange parts.”

Dunkley also did not feel that former Operations & Maintenance Director Tony Las Casas knew enough about the equipment to make a recommendation. “This is the advice that we took to purchase this equipment,” he said. “It makes no sense.”

District Administrator Tanya Quickel disagreed. “We had our six grader operators, who are extremely experienced, evaluate every piece of equipment,” she said. “That was written up, and that information was provided. That was used as the basis for our recommendation for this.”

Quickel said the operators’ specific comments had not been included in the staff recommendation for the purchase, and Dunkley said he thought that information should have been included. “The board should have the option of seeing all this information,” he said, adding that the bonds have not yet been fully paid off for the six graders purchased eight years ago.

Dunkley also questioned the purchase of two Ford F-250 pickups that were in the same purchase order. Quickel explained that the F-250s’ carriage height enable them to move through flooded areas more readily than the F-150s.

Supervisor Ralph Bair said he had reviewed the purchases with Quickel when they first started considering them. The district has budgeted to purchase one grader a year until they are all replaced, he noted.

“We had put aside money to purchase equipment, and that’s how districts do business,” Bair said. “You evaluate a piece of equipment, decide how many hours it has run, and all that evaluation has already been done. You can’t continue to rely on those six pieces of equipment, especially since this one has been down for two months already [while the district was] deciding whether to repair it or buy a new one.”

Bair also pointed out that the district does not have the large facilities to repair and maintain heavy equipment.

But Dunkley said he was interested in considering a change in the way the district looks at equipment issues. “We have to sit down and look at the overall picture,” he said. “We have to refocus.”

Dunkley reiterated that he wanted to remain with one brand for purposes of interchangeability. Supervisor Carol Jacobs said she had preferred the John Deere because it was American-made.

Quickel pointed out that the replacement was on the agenda last month because it needed a major repair. “It was beyond what the administrator could approve, so I had to bring it before you. I’m sorry it was your first board meeting,” she said to Dunkley. “A lot of work went into the executive summaries. We had three representatives here who had extensive experience, and gave you a lot of information. One of the biggest pieces of information they gave you is that these graders are used much more than the average and have at least one-third more engine hours than they generally see,” she said.

Bair pointed out that a contract has already been signed for the purchase of a new grader and made a motion to stick with the original motion but to examine the question more closely next year when another grader will be under consideration for replacement. The motion carried 3-2, with Dunkley and Hager opposed.

ABOVE: Former Indian Trail Improvement District Supervisor Carlos Enriquez (third from right) was recognized Wednesday for his four years on the board. Enriquez was defeated in the November election by Supervisor Gary Dunkley (left).