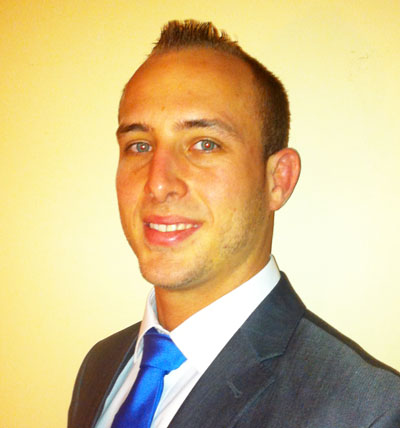 Aside from the Group 4 seat, the Group 2 seat held by Councilwoman Martha Webster is also up for election this year. Webster has drawn a challenge from former Councilman David Swift.

Sallenbach is a teacher of alternative-education students with behavior issues at Turning Points Academy. He has been a resident of Royal Palm Beach since July 2009.

“I’ve had a passion for getting involved with the community ever since I was young,” he said. “I’ve been teaching since I was 23. I’ll be 29 in February.”

Sallenbach volunteers through schools and local businesses, including at Fit 2 Fight martial arts studio just east of the village. “I work as a volunteer because I love the martial arts,” he said. “The more I started working with the kids and parents, the more I had a passion for being a public servant.”

He also does volunteer tutoring with kids at his school and area elementary schools.

Part of his platform as an educator is to support the village’s scholarship program, run through the Royal Palm Beach Education Advisory Board. “My goal is to try to get as much money funded there as possible,” he said. “The more scholarships you give out, the better opportunity you give toward the residents, which is going to better the value of homes. It’s going to better the well-being of the citizens, and it’s going to create better job opportunities.”

Sallenbach said he would like to see money allocated toward local schools not only for emergencies but also in case financing dries up for certain programs.

“School funding comes and goes, whether it be federal or state,” he said. “I want my schools around me to not have to worry. If something happens, I want to have a fund available so that we don’t have to drop the drama club, if you will, or other services that make education so valuable for the students.”

He also has ideas to improve the local economy. “I’m researching the permit fees and how to keep taxes at a low rate for our citizens, but at the same time maximize services with those taxes in a manner that promotes businesses,” Sallenbach said.

“Royal Palm has a lot of parks and recreation,” he said. “Everywhere you go, you’ll see a park or a baseball field. My goal is to utilize those resources.”

He would like the village to sponsor various athletic tournaments such as softball, kickball or, his favorite, jiu-jitsu tournaments.

Sallenbach initially planned to run for the Group 2 seat against Webster but switched to Group 4.

“When I looked for what seat to run in, the best way I could serve the citizens was to run for Seat 4,” he said. “Seat 2, I feel Martha is doing a really good job. She’s always on the ball as far as getting things done for the citizens and working on progress for Royal Palm.”

Sallenbach said he was concerned about a recent investigation of Pinto by the Palm Beach County Commission on Ethics regarding his involvement in the leasing of a property owned by his boss, County Commissioner Jess Santamaria. Although the commission found no wrongdoing, it advised Pinto to avoid appearances of conflicts of interest.

“I feel Councilman Pinto has done a lot for the village, and I have a lot of respect for him, but based on what I’ve seen, I think there is some sort of conflict of interest between working for the county and working for the Village of Royal Palm Beach,” Sallenbach said.

Sallenbach, who was born in West Palm Beach, is a third-generation Floridian. He has been married one year. He received his bachelor’s degree in social science from Florida Atlantic University in 2006 and his master’s degree in educational leadership from the American College of Education in 2011.