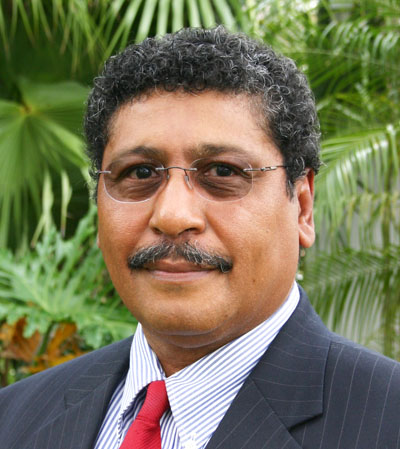 Pinto, who has held office since 2003, is seeking re-election to the council’s Seat 4 on Tuesday, March 12.

Pinto said he is better qualified because he brings 20 years of executive experience on Wall Street with three major banking firms, a large software company and international projects under his belt. He also brings leadership experience. As a lieutenant colonel in the National Guard, now retired, his experience includes serving as a battalion commander in the Persian Gulf War.

“I have a lot of experience, knowledge and capability to bring to bear for the Village of Royal Palm Beach,” said Pinto, who has also been active with Caribbean-Americans for Community Involvement (CAFCI) for many years.

When he first ran in 2003, Pinto said the village needed to make significant business decisions in the interest of its long-term prosperity. “That’s what I’ve been doing for the last 10 years,” he said.

Among his top accomplishments was to get the council to agree that it was time to “get out of the police business” and contract with the Palm Beach County Sheriff’s Office.

“As I learned the lay of the land, I said, ‘Chief, we will never retain the best and brightest.’ If I was a young person who wanted to start a law-enforcement career, how much career will I have working in a Mayberry police force?” Pinto recalled telling Stepnowski.

After a year of tense negotiations with the police union, it was the union that first threatened to go to the PBSO, Pinto recalled. “That was perfect,” he said. They opened the door for us on this.”

Pinto said it was an opportunity to get more coverage without additional staff or money. “We had a lot of folks doing administrative stuff that under the PBSO structure we wouldn’t have, so we would take those positions and put them back on the streets,” he said.

In addition, the village also got other law enforcement components Royal Palm Beach could never afford — a SWAT team, a full cadre of detectives, and the mounted and motorcycle components. The village would also become part of the force that already covered the surrounding areas.

Selling the village’s water utility to the county was another major accomplishment, too, although it was also emotional, Pinto said. “There, the business proposition was very easy to make,” he said, explaining that the village’s water utility was profitable but had problems, including the need to invest millions upgrading the operation to comply with Environmental Protection Agency standards.

“We had the water wars going on, where surrounding agencies were trying to encroach on our areas of water rights to sell water, except there were no residents at the time to buy the water, so the problem was we would have to spend $10 million to $15 million laying new pipe to increase the service area,” Pinto said.

Village staff calculated that residents’ water rates would double if they took on the infrastructure improvements themselves.

Negotiations continued with the county, and the village finally agreed to sell its water utility to the county for $70 million, as well as its utility expansion rights in The Acreage, and collect 10 percent of future revenue in return.

This one decision put the village on strong financial footing to weather the economic storm of the past several years, Pinto noted. “We did not reduce services,” he said. “In fact, we increased services. We did not gut our staff.”

Pinto said the council has also developed a five-year transition strategy that will bring Royal Palm Beach through the downturn in revenue with no tax rate increase.

Pinto said he can best serve residents because he has delivered on his promises. “I said I would bring to bear my business experience and acumen, my leadership ability,” he said. “I have provided leadership on this council since I have been here. I have been an integral part of the major decisions that have been made.”

His most important goal over the next two years is to decide intelligently about how to dispose of the 145-acre former wastewater treatment plant site on the village’s north end.

“That property really belongs to the citizens of this village,” Pinto said, pointing out that surrounding residents have made it clear that residential use is the only compatible use for the land. “I want to put a park there as well. We’ve got the capacity. I’d like to see a nice park on the north side of Okeechobee Blvd.”

However, the time in not right for any such development, Pinto said. Instead, the village should wait for the economy to fully come back. “We’ll put it on the market and get a developer to come in with a plan that addresses what I just shared, and we should be selling that property for $30 million to $35 million,” he said.

Once that happens, Pinto would use the money to liquidate the village’s bond debt on the new Royal Palm Beach Commons Park and build an aquatic center. “We don’t have our own aquatic facilities,” he said, adding that one is needed to expand athletic programming for youth and could also be used for water safety programs.

Pinto also wants to solidify how to financially support Palm Beach County’s Office of the Inspector General so that the burden is on vendors as was originally intended, not taxpayers.

He predicted the village will not have to raise property taxes due to planning strategies the council has put in place with its current five-year plan, and may be able to reduce the tax rate for fiscal year 2013 without cuts to services. “Right now, based on how we’re tracking through the first quarter, we’re going to be in very good shape,” Pinto said.

To ease traffic, he said the implementation of traffic circles and changing speed limits have worked fairly well.

“We used to have a situation where you come off of Okeechobee Blvd. heading west, where once you crossed State Road 7 it would drop from 50 miles an hour to 35 miles an hour,” he said. “That created an unintentional speed trap for people, and it was dangerous.”

The village has now dropped the speed limit from 50 to 45 west of SR 7, then after Wildcat Way, it decreases to 40 mph the rest of the way through the village.

Pinto is pleased with the job performance of Village Manager Ray Liggins. “I think you have to look at the reality that Ray is still going through a growth phase,” Pinto said, pointing out that Liggins, as village engineer and assistant village manager, was being developed for the job but was thrust into the position with the untimely death of his predecessor, David Farber. “I think his growth from last year to this year has been exponential.”

The Aldi grocery store chain’s decision to locate a regional distribution center in the village is a tremendous success, he said. “It’s a classic example of the right application for the right site,” Pinto said, claiming some credit for helping persuade Aldi to choose Royal Palm Beach as opposed to the 26 other locations they were considering.

Pinto recalled telling them that the village already had the zoning for the use they wanted in the perfect location for them. “From that moment, it began moving down the track very rapidly,” he said.

Pinto’s vision for the future of Royal Palm Beach is to hold on to the quality of life that has been established for young families while continuing to serve the community’s senior citizens.

He said voters should vote for him because he has fought and won many battles for residents over the past 10 years and will continue to do so. “I am not a politician, I’m a public servant, and I have one special interest group — the citizens,” Pinto said.