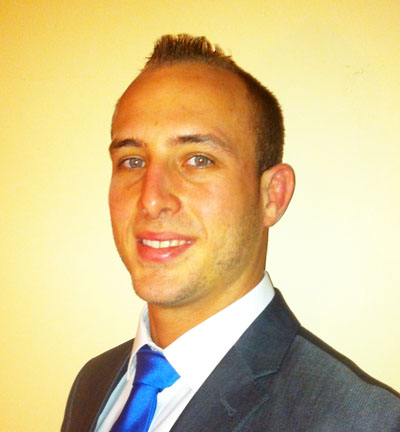 Teacher Justin Sallenbach is looking to bring new ideas to the Royal Palm Beach Village Council, challenging Vice Mayor Fred Pinto in the Tuesday, March 12 election. He hopes residents will see his passion and dedication and elect him to Seat 4 on the council.

Sallenbach, 29, moved to the village in July 2009. He was born in West Palm Beach and is a third-generation Floridian. He has been married for a year and teaches alternative-education students at Turning Points Academy, which serves children with behavioral issues.

Sallenbach received his bachelor’s degree from Florida Atlantic University in 2006 and his master’s degree in educational leadership from the American College of Education in 2011. He’s now training to become an assistant administrator with the Palm Beach County School District.

Among his top accomplishments, Sallenbach served as vice president of the Greenway Village North Homeowners’ Association. And although he’s a political newcomer, he said he would bring fresh ideas to the council.

“This is a first for me,” Sallenbach said. “But I have a hard-work attitude, and I come with a different kind of mind-set. Often the mind-set I see from the top down in politics is about the law; my background is in service.”

He chose to run rather than join a board because he has spent many years volunteering and wanted to play a larger role in village policies. “I want to help better the lives of those around me,” he said.

Sallenbach believes residents want better services and lower taxes, something he’d work hard to make happen. He also seeks to help the village’s businesses by offering incentives. “There’s many vacancies that need to be filled,” he said. “Additionally, 40 percent of the land zoned for commercial development is undeveloped.”

With so much commercial space for larger businesses to come into the village, Sallenbach said he doesn’t understand why anyone would want to develop the village’s former wastewater treatment plant site.

“I don’t know why anyone would want to go out and rezone the land when we still have other land on the corridor closer to State Road 7,” he said.

Instead, he would like to see the property stay residential or perhaps be the site of an assisted-living facility. The space could also be a location for an after-school program.

“I believe in having a savings fund,” he said. “I’d also like to try to build an after-school program. Many of our children come from working-class families, and for some reason the school district doesn’t provide after-school programs. I’d like to see us have that.”

He believes the village could provide tutoring and organized recreation along with after-school care. “We have a growing number of students in the area, and I think that’s something that could keep them out of trouble,” Sallenbach said.

Money could also go to help with improvements around the village, such as roads, Sallenbach said.

“I’d like to have more efficient roads,” he said. “People want better outlets, but at the same time other residents don’t want those outlets because they’d run through residential communities.”

Sallenbach said it’s about finding a balance. “Right now, the commute times for Royal Palm Beach residents are 35 to 40 minutes on average,” he said. “To me, those can be cut.”

For that reason, he supports the extension of State Road 7 to Northlake Blvd.

“If we could put more outlets but put things like speed bumps in, you could go through residential areas without having to worry about speeding and heavy traffic,” he said. “That is a real concern for residents.”

Sallenbach said he might support opening the berm at Madrid Street in La Mancha to the SR 7 extension, “but not if our residential communities are going to be getting blown through by traffic,” he said, adding that he’d like to see Royal Palm Beach consider less costly traffic calming measures than roundabouts.

“I’d like to see resourceful spending toward our roads,” Sallenbach said. “When I did the research, I found that roundabouts are very expensive to build. I do believe they look great, but I think you can save money.”

Before he would be willing to cut Royal Palm Beach’s budget, he said he would push for the business initiatives. “I wouldn’t want to make more cuts,” he said. “I’d rather find some way to sell more property to the county. It may not be the best solution, but if it would save jobs, I’d do it.”

Another way for residents to save money, Sallenbech said, is to reduce permit fees to help promote investment in homes.

“There’s some permits I’d like to see amended to promote the growth of property values,” he said. “If families want to make additions to their properties, I understand there is a fee. I believe that fee is 30 percent of the original permit fee, and I’d like to see that lowered. Many residents are having a hard time bettering their homes because of that. It may not seem like a lot to those who are more affluent, but for working-class people, that’s tough.”

Sallenbach said he chose to challenge Pinto because he believes the incumbent has become too complacent in the past several years. “I think he lacks a lot in his work ethic, specifically in the last two years,” Sallenbach said. “I know my opponent has a lot of experience; that’s not what it’s about. I’m a common man with common sense, and it’s about representing my village residents.”

Sallenbach said Pinto has not been an active liaison to the Planning & Zoning Commission or the Education Advisory Board.

“He’s not mandated to show up, but I think being there face to face is the best way to communicate,” he said. “If you’re not at the meetings, well, that’s the bare minimum of getting the job done.”

He also pointed to Pinto’s employment with County Commissioner Jess Santamaria. “The conflict of interest he had with the county is evident,” Sallenbach said.

Though Pinto has done good for Royal Palm Beach, Sallenbach believes there should be more opportunity for new voices on the council and would support term limits for council members.

“It would have to be voter-initiated, but I think serving for eight years is enough,” he said. “It gives others the opportunity to have a voice.”

Sallenbach said he would strongly advocate for residents and asked them to get out and vote for him on March 12.

“I will put our residents above everything else,” he said. “I believe in the power of the people. You’re only as good as the people who vote you into office. As a councilman, I will start by listening to each and every resident, hearing all sides of the story.”