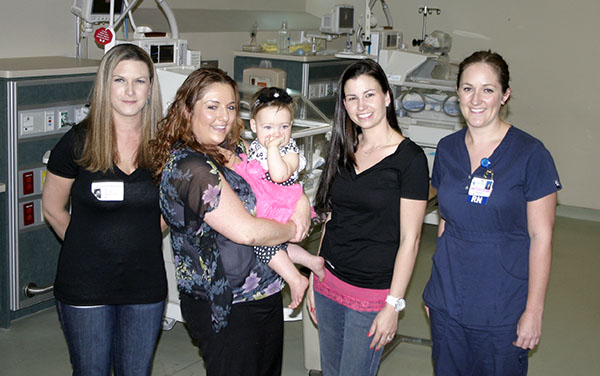 Kaylee, who turned 1 on Easter Sunday, spent 16 days in the hospital’s NICU when Tracy delivered early due to an onset of preeclampsia, a condition of high blood pressure and excessive protein in the urine.

“For Wellington Regional, it’s really inspiring. It’s great to see babies for their first-year birthday because they’ve reached a huge milestone,” said Helen Rengepis, WRMC’s director of marketing. “They’ve overcome a lot of odds to get there.”

Kaylee has now completely caught up on her motor skills. “By seven months, she was still a little behind in certain motor skills, but they say she’s advanced now,” Tracy said. “She’s started walking.”

The traumatic part for Tracy was that she was discharged after a few days, but Kaylee had to remain in the NICU. “I was so depressed that she was here for Easter, but the nurses took pictures,” she said.

“Normally, when they come out in the 33rd week, they will have some respiratory distress,” said Joe Del Vecchio, director of neonatal intensive care. “In the 33rd week of gestation, babies have what is called surfactant, which is basically a lube oil for the lungs, so kids don’t really breathe that well. We put a tube down and basically coat them with this surfactant, and it allows the lung expandability and compliability.”

The equipment is similar to what would be used on adults, but miniaturized for the infants.

Tracy said her experience at WRMC was wonderful. “Every person who has been pregnant after my experience, I told them, ‘No question, go to Wellington,’” she said.

The highlight of the reunion was seeing nurse Stephanie Poirier, who watched after Kaylee while she was in NICU. She is also the mother of triplets who also spent time in a NICU.

WRMC is the only hospital in central Palm Beach County with a Level III-B NICU, which means it is equipped to do surgery on premature infants, including lung, cardiac and gastric repair.

“We have sub-specialty surgeons on staff to provide the extra services if a kid has a particular problem,” Del Vecchio said.

WRMC’s new NICU has been in place for about four years. “The old NICU was on the other side, and it was really small,” Del Vecchio said. “Then they built this new one and they migrated over here and went from a [Level] II to III. We have 24-hour neonatologists, which are pediatricians who go to three more years of school for a fellowship. They are here in-house to take care of the neonates.”

The reunion was facilitated by Stacey Nyborn and Tara Gonzalez, owners of Oh Sew Sweet Designs for Boys & Girls, who also have started a nonprofit taking donations for NICUs. “We have an online business out of Palm Beach, and we are taking donations for local NICUs,” Nyborn said. “For the girls, we do the headbands, and for the boys we do little caps.”

Their web site is at www.ohsewsweetkkbb.com, and they are on Facebook at www.facebook.com/ohsewsweetkids.

“I just thought it was a nice thing they were doing for other families,” Tracy said, explaining that she patronizes Oh Sew Sweet, and Gonzalez’s friend works in the NICU at Beth Israel Deaconess Hospital in Boston, where they started donating the NICU headbands and caps.

“When these ladies donated the headbands for the Boston hospital, I told them that I know what that means for those parents, and they were nice enough to include me in coming here,” Tracy said.

The WRMC NICU is equipped with 25 beds arranged in an open, spacious area on the hospital’s new fourth floor, according to Del Vecchio, who retired recently from the Navy, where his accomplishments included building a NICU at Camp Lejeune in North Carolina. He started at WRMC in July 2012.

The facility can accommodate “micro preemies” born with profound conditions that require four months or more of intensive care. Nestled around the NICUs is furniture for use by the families when they visit.

“This is the best layout I’ve ever seen,” he said. “You will not see this amount of space ever. These kids, when they’re born at 23 weeks, they’re going to be here at least 18 weeks of their life, so you have to have a little more space.”