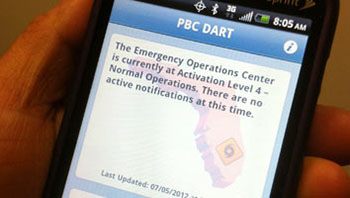 Palm Beach County’s Department of Public Safety and the American Red Cross gave a joint presentation Tuesday to the Palm Beach County Commission focused on preparations for the 2013 hurricane season. Among the highlights was a new, interactive social media project.

“What we’d like to do today is talk about some of the new programs that have been developed,” Bonvento said. “One of the things we’re excited about is our new web site redesign that’s available to all our citizens and businesses. We also have a new social media room where we monitor Facebook and Twitter so we can get the information out to the people, and most importantly, we can find out what’s happening in the community.”

The Department of Public Safety also has new hurricane guides and evacuation and shelter maps. It can also identify the locations of all the gas stations and grocery stores with generators. The digital information and social media support center can give real-time information, such as shelters that are open or closed, or roads that are closed.

“We’re really proud of our new DART, disaster and recovery information tool,” Bonvento said. “This application is going to allow us to provide information over mobile phones.”

Bonvento said it will be a great evacuation tool, allowing the Emergency Operations Center to identify shelters and give directions to those shelters, and also tell what hardware stores, grocery stores or gas stations are open with generators.

“Most importantly, people all have mobile phones, and they’re all taking pictures, and they can send those pictures in, which will allow the community to send information to us that we can use in delegating our resources,” he said.

Bill Johnson, director of emergency management, said 58 percent of the population now has a smartphone that can access the site. The new mobile phone application currently has two phases, before the emergency and after the emergency.

Users will be able to use built-in GPS or type their address in for full interface with the site, which will tell the user what evacuation zone they are in, whether they are in an emergency and where they are in relation to their nearest shelter, as well as driving directions.

There are also elements on how to make a plan, build a survival kit, be informed and be involved.

The after-emergency portion of the application works similarly but includes real-time information on gas stations, hardware stores and grocery stores that are open, with directions how to get there. “In the next few years, we plan to add other things such as pharmacies,” Johnson said.

The site also has a damage reporting tool for homes or businesses, which is used for rapid assessment by the EOC to get whatever assistance is needed to an area.

Johnson said about 3,000 people have downloaded the application and some actually used it during Tropical Storm Isaac.

Commissioner Priscilla Taylor asked what is available for people who do not have cell phones or whose cell phone is not working, and Johnson said the web application is a supplement to services that have always been available. He said damage assessment teams will still be out establishing damage assessment grids.

“This program gets our community involved, but it’s not mandatory, and it’s not a means of requesting any assistance,” Johnson said. “It’s not meant to be a means of damage reporting.”

Bonvento said the county will continue to work closely with the media as it has in the past. “The critical information will be disseminated to the media, via radio, TV,” he said. “This is just another tool that will be available to us to disseminate that information, but we will make every effort and use every resource available.”

Bonvento stressed that emergency preparation and response are a team effort with other organizations such as the Red Cross but said that the new application, developed by a county staff member in-house, is probably the only one of its kind currently. More information about the application can be found at www.pbcgov.com/dem.

Rob Levine, regional executive director of the Red Cross, said his organization works closely with the county to assure that families have shelter, food and psychological help after a disaster. Its most common response is for fire victims.

“We are part of a national disaster response framework, and we are a vital part of the county framework, so we have a team that works with emergency management each and every day, with the school board to make sure all our shelters are prepared, and after the storm when life returns to normal for so many, but for some it doesn’t,” he said. “We work with many faith-based and community organizations so we can help people rebuild their lives.”