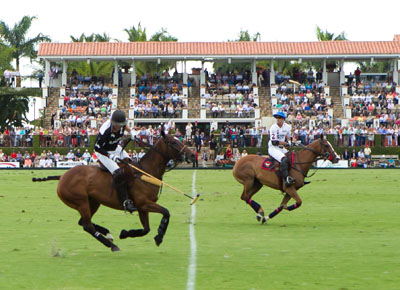 The Palm Beach County Convention & Visitors Bureau this week recognized the International Polo Club Palm Beach with the 2013 Providencia Award, based on the organization’s significant and substantial impact on the tourism industry.

The honor was fittingly awarded during a luncheon at the Marriott Hotel West Palm Beach to celebrate Travel Rally Day, the national day of observance within National Travel and Tourism Week, sanctioned by the U.S. Travel Association, aimed at generating awareness of the importance of travel and tourism.

“The Providencia Award is Palm Beach County’s most important symbol of recognition for the local tourism industry, which employs 45,000 county residents and contributes over $5 billion annually to the local economy,” CVB President & CEO Jorge Pesquera said. “I could not think of a better time to celebrate this award, its recipient, and the many worthy nominees, than today, when industry representatives from around the country are rallying together to recognize the extraordinary economic contribution of tourism here in the United States.”

IPC President John Wash accepted the award on behalf of the club.

“The International Polo Club is home to American polo’s triple crown — the three highest-rated polo tournaments on the continent: the USPA C.V. Whitney Cup, the Piaget USPA Gold Cup and the USPA Maserati U.S. Open Polo Championship,” Wash noted. “And now, we couldn’t be happier to be home to the 2013 Providencia Award. Our 10th anniversary season broke all records. Winning the Providencia Award is truly the icing on the cake.”

The International Polo Club was chosen as one of three finalists by the CVB’s five-member Providencia Committee, who evaluated and scored 15 different nominations. Those three finalists were then put to a public vote on the Palm Beach Post’s web site. This year’s finalists also included Lynn University and the Honda Classic. More than 2,640 people voted through the online poll.

The Travel Rally Day luncheon was attended by more than 380 industry partners who, in addition to hearing the 2013 Providencia winner announced, also heard from both Pesquera and keynote speaker Susannah Costello, vice president of global brand for Visit Florida. Both shared insight and knowledge on the impact of tourism and the importance of tourism marketing and branding in today’s world.

Pesquera also made remarks regarding the 30th anniversary of the founding of the CVB and the significant achievements in terms of visitation and economic impact for this important economic sector. “According to a CVB study conducted in 1988, visitor spending was equivalent to $1.57 billion in 2013 dollars. Today, the industry generates more than $5 billion to the local economy — that is triple growth over the past three decades,” Pesquera said. “It is a truly incredible sign of our industry’s resilience that we have made a full recovery after some challenging economic times, and are close to our all-time peaks in virtually every tourism performance category.”

Pesquera also took the opportunity to remind partners that each Palm Beach County household saves $890 in taxes annually, thanks to tourism. He noted that a 10 percent increase in visitors would positively impact the county’s economy through $550 million more in visitor spending, 5,000 more local jobs and $82 million in additional state and local taxes.