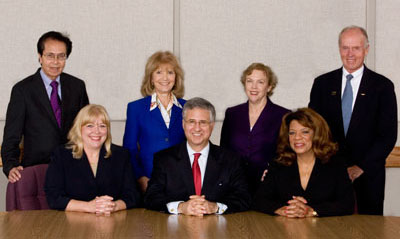 Attorney Brad Biggs, representing the municipalities, said he was at the meeting in accordance with the county’s ordinance creating the Office of Inspector General, which states that the league and the county will meet every year to discuss the IG’s budget.

“We really don’t intend to discuss the specifics of the budget,” Biggs said. “The league really just wants to put forward some conceptual ideas for the board to consider during this year, and we’d also like to truly express the league’s appreciation for the prompt responses to our requests for budget information and documents provided by the IG staff. It has been very good this year. The response has been much more forthcoming than in prior years, and we thank you.”

Biggs added that there continues to be a misunderstanding concerning the county commission’s role in the budget process.

“Some statements were made in the past that the BCC does not approve the IG’s budget, that the BCC has no authority, that the IG has carte blanche to do whatever the department wants, and we don’t feel that this is the case,” Biggs said. “We think the ordinance is very clear.”

He pointed out that the IG ordinance makes the office’s budget subject to final approval by the county commission. The ordinance also states that the county commission decides whether to increase the IG’s spending base. “So you do have a lot of authority,” Biggs said. “Furthermore, there seems to be some misunderstanding recently about the IG’s functional independence versus its legal or monetary independence.”

Biggs pointed out that in a recent suit filed by the IG against the county, the court entered an order April 17 that specifically stated the IG’s request for relief was denied on the merits.

“I don’t think that has been really discussed here in front of you before,” Biggs said. “The assertions introduced and argued in the briefs by the municipalities were thus found to be in the right, so there isn’t any confusion right now what that mandamus suit found, and it did find that the IG’s office does not have stand-alone official capacity.”

Biggs added that the court ruled the IG had no legal right to sue on the issue of financing because the office is not a legally separate entity from the county with a capacity to sue and be sued. Rather, the office was set up to be functionally independent as to its functions authorized by the county ordinance, but not legally independent. The IG’s office constitutes a department or division of the county with only the enumerated powers of the ordinance regarding audits and investigations, he explained.

“I think it’s important to put that out there so that you know what the case law says,” Biggs said. “The case law is clear, and any attorney understands that.”

As such, Biggs said the IG’s budget before them should be viewed as any other budget request by any other department of the county government.

“Ultimately, it is up to the county commission to set the limits on spending for this county department, so long as the department has sufficient financial support for the Office of the Inspector General to fulfill its duties as set forth in the implementing county ordinance,” Biggs said. “You truly do have a lot of authority here. It’s all in your ordinance, and we hope that you’ll consider that.”

Biggs added that the league believes it would be helpful if the IG would provide a budget statement or forecast that more fully explains the office’s workload, staffing needs and overall vision. “We still don’t think we’ve gotten that with our executive summaries to date,” he said. “This type of information should not be addressed by just referencing information on the IG web site, but rather, communicated through a thoughtful, edited executive statement about these issues during the budget process as any department would do.”

Biggs said those types of executive summaries are very common and usually accompany budget requests. “They also provide transparency, which is always a good thing,” he said. “That way, very large and non-specific items like indirect costs could be more fully explained.”

As an example, Biggs said that about $206,000 from last year’s budget, and about $125,000 projected in this year’s budget, were indirect costs. “We’re just not sure exactly what they are, so in the future, we ask that this type of summary information be initially provided with the IG’s preliminary budget request to the league,” he said.

Biggs pointed out that indirect costs coupled with information systems services (ISS) amounted to 60 percent of the operational budget. “It’s not a minor amount,” he said.

Palm Beach County Vice Mayor Priscilla Taylor asked about those costs. “We have one of the best ISS departments in the country, and it always bothers me why any department is not using the county’s ISS,” she said.

Staff members said that indirect costs are an allocation methodology for services offered by the county, such as personnel or facilities or the budget office, and that the indirect cost is that office’s fair share allocation.

Office of the Inspector General Chief of Administration Joe Doucette said the office does use the county’s ISS department. “We find it a cost-effective avenue to get our work done,” he said.

Biggs said the way the budget is set up, it is difficult for members of the league to determine what the charges were. County Administrator Bob Weisman said the method of allocation would be provided to the cities.

Doucette said he was happy to meet with the league committee. “In prior years, we did not have that opportunity,” he said. “This year, we put the horse before the cart, and we were able to iron out some of these details and get them additional information that they were looking for.”

The total IG budget proposed for 2014 is just over $3.7 million, roughly the same as last year.

Palm Beach County Mayor Steven Abrams asked whether the county could be reimbursed the money that the cities had not paid during the course of the lawsuit filed against the method of financing the office. Assistant County Attorney Leonard Berger said one of the terms of the lawsuit was to get everything back that the county had paid to cover the cities’ failure to pay their share.

Taylor made a motion to approve the 2014 budget for the Office of the Inspector General, which carried unanimously.