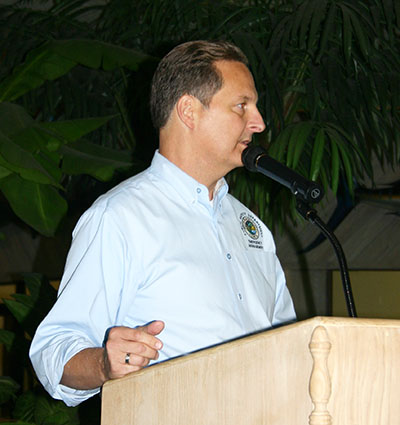 Rising temperatures in the Atlantic Ocean are likely to increase the frequency and intensity of hurricanes this season, according to Palm Beach County Emergency Management Director Bill Johnson.

“That’s a pretty busy season. Folks should hang on because we’re going to be in for a rough ride. As you know, it only takes one storm to ruin your day,” Johnson said, pointing out that a mere tropical storm such as Isaac last year or Hurricane Sandy, which passed by well off Florida’s east coast, can bring havoc.

“Isaac dumped 18 inches, 25 billion gallons of water, on Wellington and The Acreage and caused a week and a half of misery, particularly in The Acreage,” he said. “Sandy, besides causing the misery that is still going on up in the Northeast, did come by us and took away a significant portion of our beaches. We don’t need to be struck directly by a storm for it to impact us.”

Johnson said this hurricane season is in a neutral weather pattern, similar to 2005 when Hurricane Wilma struck South Florida.

“We also have one other thing that’s absolutely adding to our factors… We have an increasing Atlantic sea surface temperature,” he said, explaining that the heat of the ocean feeds tropical systems.

Johnson’s goal is to get everyone prepared for storm season.

“There is still a third of folks who have no hurricane plan whatsoever,” he said. “Only about half of those folks surveyed have an evacuation plan.”

During a storm, most people get their information from television rather than emergency management specialists. “Public safety officials are really where the information should be coming from because we’re going to be the ones calling the shots during a storm,” Johnson said. “We’re the ones who know when the shelters are open, and we’re the ones who are going to be calling the evacuation zones.”

Although many people are aware that they could be on their own for three to five days, they’re not prepared. Once again, Isaac serves as an example.

“There were very few stores that were actually closed for any length of time, no stores that were destroyed, yet there were people who needed water, ice and other supplies,” Johnson said. “So that told me that many people did not heed our warnings.”

Johnson said he preaches a four-point preparedness message. “One is to make a plan, two is to build a kit, three is to be informed and four is to get involved,” he said.

He recommended people visit www.pbcgov.com/dem for disaster preparedness information. “On that site, we have a 40-page hurricane guide that’s like what the TV stations and other folks put out. Take the time to look at that,” Johnson said. “If you know people who haven’t done that, please spread my gospel, so to speak.”

The site also has a shopping list of hurricane supplies, as well as what to put in one’s hurricane kit.

People should think about how they are going to let friends and family outside the area know how they are doing. Johnson suggested picking a family member or friend who is outside South Florida to be the primary contact, because there is a good chance of communications going down and available phone connections being overloaded.

“I have a brother who lives in St. Paul,” Johnson said. “I’m going to make one phone call to him and tell him I’m OK. Everybody else in my family knows to call him.”

He noted that not everyone needs to evacuate. “We evacuate because of storm surge,” he said. “Surge is that wall of water that comes in from the ocean and overly extends into the county. In some cases, it’s only a quarter of a mile or so, or maybe a mile in some cases. We’re very lucky in Palm Beach County, because of the dynamics of our geography, that we don’t have a very large surge area. You don’t need to evacuate in Wellington because the surge doesn’t get out this far.”

The only others who need to evacuate are those living in sub-standard structures.

“If you live in a home that’s relatively well-built, if you live in a home that is not a mobile home or a manufactured home, you will survive the storm,” Johnson said. “If it is a significant storm, you may lose a portion of your roof. You may get wet, but you will live through that storm, so there is no reason for you to jump into the car and get stuck on the turnpike somewhere between here and Orlando in the middle of a severe storm.”

People who do not have to evacuate should identify a safe room in their home. “More than likely, that means a bathroom or a closet within the interior of your house,” Johnson said. “That’s where you are going to camp out.”

If the bathroom has a window, it should be shuttered or boarded up, he said. Anyone who thinks it would be unsafe to stay in their home could consider asking a friend close by if they will share their home during the storm. As a last resort, the county has 15 storm shelters. “It’s probably going to be warm, sticky and uncomfortable in there,” Johnson warned. “That’s why it’s always better in your plan to fortify your home or find a friend.”

A disaster kit should include prescription medications, bearing in mind that they might not be refillable for an extended time after the storm. He pointed out that when the governor declares a state of emergency, health insurers’ restrictions on refilling prescriptions within a certain time period are waived.

Other things to think about are infant supplies and cash. “We have become a cashless society, but when the ATMs and credit card machines are not working, the greenbacks work in a disaster, so after you fill up the gas in your car, run to an ATM machine,” Johnson said.

Medical records should be gathered together in a safe place. “Make sure that your wallet is kept nice and safe and dry,” he said. “Put it in a zip-lock bag. I like to keep those things in my car, parked in my garage. That’s a double layer of protection.”

One of the more recent additions to the Palm Beach County Division of Emergency Management’s arsenal of support material is a smart phone application available to Android and Apple phone users called PBC DART (Palm Beach County Damage Assessment Resource Tool). It has numerous resources for both before and after a hurricane or other disaster.

He also encouraged people to get involved. “For those of you with a little time on your hands, I encourage you to give back to the community,” Johnson said. “Volunteerism is so important after a disaster, because there are people who need all of our help after a disaster.”

But it is important to get involved beforehand. “It is so advantageous to know what we are dealing with and what our capabilities are before the disaster,” Johnson said. “If we can train you, if we can assign you, it’s so much easier.”