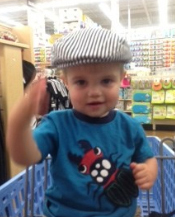 For 20-month-old Hayden Chipley of Wellington, “eating” consists of drinking a special formula every day and taking a steroid to keep his esophagus from becoming inflamed.

Hayden has been diagnosed with a severe case of eosinophilic esophagitis (EE), an allergic inflammatory condition of the esophagus, which makes it difficult to swallow, explained his mother, Jen Chipley.

The disease is rare. Hayden is allergic to virtually all food, although since being treated at the National Jewish Health and Children’s Hospital in Denver in June, he’s in remission, so solid food may be re-introduced soon, his mother hopes.

Despite his condition, Hayden is a happy little boy, and no one would ever suspect from looking at him that he’s battling such a disease, Chipley said. She is grateful the condition was caught so early in Hayden’s life. “So it’s not as if he was getting ice cream every night for dessert and we had to take that away from him,” she said.

Chipley’s co-workers at JFK Medical Center Charter School in Lake Worth and members of her church, the First Baptist Church of Wellington, of which the boy’s grandfather is senior pastor, were searching for something they could do to help the family through this crisis.

They decided to hold a golf tournament, and the Hayden’s Heroes Inaugural Golf Tournament will be held Saturday, Sept. 21 at the Madison Green Golf Club in Royal Palm Beach.

The Chipleys have always been there for the community, said Shannon Gardner, who, along with husband, Chad, serves on the tournament committee. Gardner is also a member of First Baptist Church and used to work with Chipley.

They’ve had to scramble a bit to put the event together on fairly short notice, but things are coming along. “We all wanted to do something. The family is just fantastic,” Gardner said.

So far, about 72 players have signed on and Madison Green’s Mike Brady, who is in charge of running tournaments there, is hoping for 100.

“That would be perfect,” he said, adding that they’d also secured some silver ($1,500) and bronze ($500) sponsors. Taylor Made and Titleist have donated golf balls, and Nike is also going to support the tournament.

“He’s a great kid, so cute,” Brady said of Hayden.

And while Brady usually refrains from playing in Madison Green tournaments, he’s making an exception in this case. “This is a good way to raise some money to help with expenses,” Brady said.

Hayden was accepted into the EE program in Denver in June. There are only four hospitals in the United States that treat the disorder. Two out of the four hospitals wanted to insert a feeding tube into Hayden, which is standard procedure for patients with this condition. But as long as Hayden was able to ingest liquid on his own, his parents didn’t want that.

“We didn’t want to cross that bridge yet,” his mother explained.

Hayden underwent extensive testing in Denver — 75 skin tests for allergies alone — to understand and treat his condition. Depending on how well he does over the next few months, the family may not have to go back to Denver until December, although his care will require him to be in Denver for at least two weeks each June. The golf tournament will help defray travel costs, plus medication and formula for Hayden.

Chipley noticed something was wrong with her son at around 6 months. He didn’t seem to be gaining weight or growing. When he reached the 9-month mark, he had regressed, and by his first birthday, with no growth or weight gain and a distended belly, they knew something was seriously wrong.

He was tested for everything, including celiac disease, which came back negative. An endoscopy finally revealed the culprit: EE.

Though this hasn’t been an easy time for them, the Chipleys are grateful for all the support they’ve received.

“I’ve got an amazing family. That helps a lot,” said Chipley, who works as an exceptional student education coordinator.

The ordeal has helped her learn to trust her instincts. “Listen to your mommy gut,” she said.

At 1 p.m., there will be an awards luncheon with prizes and a silent auction. Tickets for the lunch only are $35. There are varying levels of sponsorships still available.