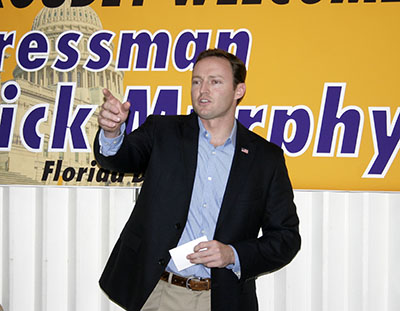 “I wish we could be doing this on a normal day of the week, but I’ve been in D.C. quite a bit, dealing with the obvious,” Murphy said, explaining that he had several similar events planned locally before he was to fly back to Washington on Monday.

Although polls show people don’t think the government shutdown is a major concern, Murphy said the longer the shutdown goes on, the more the public will feel it.

“This is a really big deal,” Murphy said. “And a lot of people I’ve talked to just here in this room, and at an event I attended earlier this morning, there are a lot of people who are really suffering because of this.”

Murphy noted that the federal government had been shut down for almost two weeks, and the effects were just starting to be felt within veterans, education, research and seniors programs. “Many government agencies can survive for one or two weeks of a shutdown, but now we’re getting into this uncharted territory,” he said.

Beyond the local effects, Murphy said he is embarrassed at the impression it gives internationally. “As we’re trying to have negotiations around the world and trying to exert our influence and our leadership, countries are laughing at us,” he said.

Murphy said the United States is the only country in the world that doesn’t automatically raise its debt ceiling when it passes an appropriations bill. “What happens in Congress is you pass these bills to fund the government, and then you have a separate bill to raise the debt ceiling for that spending,” he said. “It’s automatic in every other country, and it has now become political in our country.”

Since he has been in Congress, one of the things he has really tried to focus on is reducing the nation’s long-term debt. “There are some things that can be cut that are smart spending cuts,” he said. “There’s waste, there’s fraud, there’s abuse, there’s duplication. One of the first bills I was able to draw up was a bipartisan bill that came out of freshman members of Congress, and it was $230 billion that we found just in about three weeks. That’s where the cuts should be coming from.”

At the same time, he said, there are smart investments that can be made in the country, such as infrastructure, education and research. “Those are the areas where you get return on investment,” Murphy said.

Another area that’s important to him is the environment. “Not just because I want it for me and my kids and our grandkids,” he said. “It’s a big part of why Floridians moved here or live here. For every dollar spent on the environment, it comes back three-to-one to our economy.”

Murphy said the turmoil in Washington, D.C. is worse than what is depicted in the news.

“It is a dysfunctional organization,” he said. “Everything you read about and see on TV, it’s probably worse, and that to me is pretty sad, but it actually makes me work harder to build relations across the aisle.”

He said there is a sizable group of people who really want to make a difference.

“Right now, you’ve got this small Tea Party group, it’s only 40 or so members of Congress, blocking basically everything,” Murphy said. “Blocking all sorts of programs that would help our country.”

With the turmoil in D.C., Murphy said his office has kept its focus on helping people locally.

“We get about 1,200 to 1,400 letters and e-mails and phone calls a week to our offices on a whole range of issues, and we try to get each of those answered within two weeks,” he said. “We’ve been able to help a lot of veterans, a lot of seniors, then I do quite a bit with the local environment.”

Murphy noted that above-average rainfall has led to discharges of tainted water from Lake Okeechobee into the St. Lucie Canal and inlet to ease pressure on the dike around the lake. But the release of the water has invoked the wrath of St. Lucie County residents.

“I’ve been working with House leadership to get things like the water bill passed to help with some of the programs, such as the dike around the lake and other projects to help our environment to insure that these discharges don’t continue to pollute our water,” he said.

Murphy added that he is also working to resolve issues such as the completion of the State Road 7 extension and the revised Federal Emergency Management Agency flood maps.

Those maps came about as a result of legislation that tried to address a $25 billion deficit in the county’s flood insurance program. “Like a lot of pieces of legislation, there are unintended consequences,” he said. “While attempting to get some of the communities in flood basins to pay more, it also reset all the maps. We’ve seen some residents’ flood insurance go up 4,000 percent.”

With the shutdown of the government, he said no one can get in touch with anybody at FEMA to delay those new maps. “There are a lot of ideas we’ve been working on to try and get an extension and try to revamp that legislation so prices can’t escalate like that, and readdress these flood maps.”

Among the organizations hardest hit by the shutdown is the Department of Veterans Affairs, he said. While some members of the House suggested funding just the VA, Secretary of Veterans Affairs Eric K. Shinseki told them veterans’ operations rely too closely on other government agencies for that to work.

Murphy said he was able to get 200 Democratic congressmen to sign a letter that they sent to Speaker John Boehner urging him to bring a bill to the floor that would lift the debt ceiling as clean legislation with nothing attached, then they would address the issues that Republicans are holding up as reasons they are not approving a budget.

ABOVE: Rep. Patrick Murphy speaks to attendees at Hilary’s Restaurant.