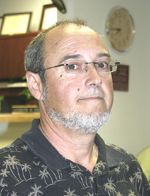 Loxahatchee Groves Councilman Tom Goltzené has picked up his filing packet to run for re-election in March.

Goltzené’s Seat 5 is the only one up for election this year. As of Tuesday, no challengers have come forward to contest the seat.
After three years on the council, Goltzené is proud of his record of fully studying the matters that have come before him.

“I’m concerned about the issues,” he said. “I do my homework, and I know what I’m talking about, whether you agree with me or not. I’m really not trying to antagonize people. I’m just trying to do the right thing and make sure we work toward consensus.”

He noted that sometimes, the consensus is not quite what he originally had in mind. “That’s what democracy’s about, and that’s good with me,” he said.

Goltzené unseated four-year incumbent Dennis Lipp in 2011, running on the promise that he would listen to residents. “I’m very happy with the way things are going in the town,” he said. “I’m happy with the improved real-estate values.”

Goltzené pointed out that recent real-estate reports have values going up in Loxahatchee Groves after a surprise devaluation last year, when other municipalities saw their property values starting to come back. “I’m very happy with the way things are, and if people are, too, then I would think we want to stick with what we have,” he said. “But there’s always politics. I’m not living in a fantasy world.”

Goltzené has not hesitated to express his opinions, even though they sometimes are not in step with the council majority. He said he believes that in order to properly decide issues, the council should hear both the pros and cons.

“I think I do bring that to the table,” he said. “Maybe there are people who would like to see things go more smoothly, but I think that it’s often important that you take a critical look at something. I think I provide that.”

However, Goltzené played a lead role in the recent passage of an ordinance allowing the operation of golf carts on town roads, which passed by a 3-2 vote.

He was also able to get the council to include canal easements for the development of equestrian trails in two local bills to transfer ownership of roads and easements from the Loxahatchee Groves Water Control District to the town, which were approved recently by the Palm Beach County Legislative Delegation.

Goltzené, 51, was born in Miami Beach, where his father was the city’s fire chief. He has a bachelor’s degree in business administration from Defiance College in Ohio and spent nine years in the building business doing accounting and financial work.

He moved to Palm Beach County in 1987 and, in 1991, moved to Loxahatchee Groves. In 1992, Goltzené started his own lawn care company, which he later sold to pursue his environmental contracting business, growing and restoring natural areas throughout South Florida, as well as eliminating invasive exotic plants.

In 2005, Goltzené sold that company and chose to concentrate on growing native plants. Since then, he has run a native plant nursery and worked for Waste Management, doing environmental restoration.

Goltzené lives in southern Loxahatchee Groves with his wife, Irene. They have six children.