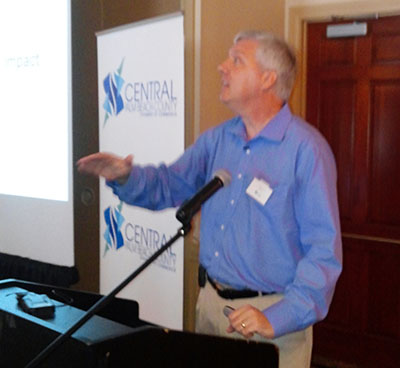 Dr. Michael Swanson, senior vice president of Wells Fargo & Company, spoke about the relationship of agriculture to other aspects of the economy at a Central Palm Beach County Chamber of Commerce economic forum luncheon held Monday at the Binks Forest Country Club in Wellington.

Swanson said that when looking at agriculture, it is easy to get wrapped up in one’s own commodity.

“When you look at sugar, or look at dairy or look at citrus, what happens is that is the driver of your economic world,” he said. “But what it is important for us to do is to step back and talk about what’s driving our world, and I think it’s a little bit different than we think it is.”

Agriculture is an asset-intensive industry, he said. “People have a lot of money invested in the ground and the equipment, so they want to know what is it worth,” Swanson explained.

Modern agriculture is being impacted by something that is common to every business — interest rates and valuation. Displaying a chart showing current trends in farmland values, he asserted that there is a bubble in agricultural land values, which is difficult for farmers to accept. “That’s a tough statement to make to people whose wealth is derived according to these assets,” Swanson said.

The drivers in agriculture are similar, whether it’s Florida, Iowa or California, he said.

“Ag doesn’t stand by itself. It’s being impacted by energy costs, by what’s happening in the economy, and the economy is being driven by monetary policy and fiscal policy,” Swanson said. “All these things are interacting, so we have these endless cycles of loops that we get confused about because we don’t understand the interactions.”

Economists apply economic models they have developed over the years to available data, which he said is not a very reliable combination due to the variables involved.

“Think for a second, in 2006 and 2007, if you would have predicted zero as the interest rate for six years, you would have been insane,” he said. “But it happened.”

Forecasters expect interest rates to start rising sometime in the next six to seven months, because the data shows some improvement, and rising interest rates will tend to drive the value of agricultural assets down.

“Clearly, if you have to borrow at a higher cost, you’re going to lower the value of the asset,” Swanson said.

The Congressional Budget Office gives a lot of weight to the gross domestic product in its economic forecasts, he explained. “They went back and looked at average GDP growth over a long period of time, and they made a forecast,” Swanson said. “When the CBO puts out a forecast, it generates all sorts of implications for taxes, revenue and spending for the government.”

He pointed out that the last 11 years have had the slowest GDP growth rate in more than 60 years.

“The question is, ‘why,’ and the answer is, ‘I don’t know,’” he said, pointing out that agriculture has been countercyclical to the overall economy for the past six or seven years. “We’ve gone through one of the slowest expansions of GDP in U.S. history, but when you look at farm income, it has been record year after record year.”

But the U.S. agricultural economy did much better in the preceding 30 years in terms of real income growth.

However, the consumer has not done well over the past decade. “Not much expansion of the economy has come from labor expansion the past 11 years,” Swanson said, explaining that the purchasing power of the average wage-earner has not grown. “We’re in an environment where we have seen a lot of rising food inflation over the last four or five years.”

The price of food fluctuates with the global food market.

“There is a very strong linkage all over the world to food prices because they are a tradable commodity,” Swanson said. “There’s very little that you can’t put in a boat and take somewhere else. Whether it’s dried milk powder, whether it’s refrigerated fruits and vegetables, whatever it is, you can move it around the world. I hear a lot of people talk about feeding nine billion people by 2050, rising incomes around the world and the impact it will have on agriculture. If we dig into the numbers, for us in the United States over the last seven to eight years, it’s reduced to one name, China.”

When it comes to China, you have a huge, single country that has been having an extraordinary change over the last few years.

“There isn’t a country out there that has the population and the income that they’re willing to allow us to have a $20 billion trade deficit,” he said. “With the rest of the world, we have a pretty flat trade balance.”

China, which has been improving its diet over the last 30 years, is now one of the world’s largest protein consumers.

“What they consume is primarily pork, and people expect them to continue to expand in their level of proteins,” Swanson said, adding that China’s policy-makers are very careful about stability, and only 2.5 percent of its protein is imported. “Could they move it up much higher? They sure could. Are they willing to do so? That’s a very different question.”

Florida agriculture has experienced pressures both from outside agricultural entities and development.

“When you look at agriculture, what is the real question about producing?” he asked. “What’s the best use of my ground? What’s going to produce the best income?”

Citrus production, even before citrus blight, had seen major reductions in acreage.

“There’s that transformation of citrus groves into real estate for commercial and residential and other alternative uses, but that drop in acreage and drop in productivity has put a lot of pressure on overall production,” Swanson said.

Economists continue to watch for the actual impact of citrus greening as opposed to other negative impacts such as weather. Other factors, such as reduced consumption of some products, also affect the market.

“Whether it’s fluid milk or orange juice, all these markets are facing tough pressure on per capita consumption numbers,” Swanson said, adding that cattle farmers are doing the best currently. “You’re seeing prices that you never thought possible. “What’s interesting is that when it reaches that price, it becomes the new benchmark for any future sales.”