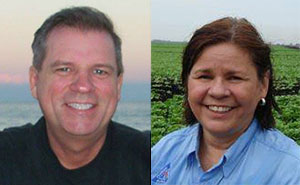 Palm Beach Soil & Water Conservation District Group 5 incumbent Eva Webb is being challenged by libertarian Karl Dickey in the Nov. 4 general election. It is a race that is putting the spotlight on a little-known board focused on countywide environmental programs.

Webb, a Loxahatchee Groves resident, has sat on the board for 12 years. She has never been challenged for the volunteer seat, and there is no salary attached to the post.

Dickey, who lives in Delray Beach, believes that there is redundancy between the soil and water district and other agencies, such as the South Florida Water Management District, but said his main issue is that the agency has not tried hard enough to create transparency.

“The current leadership has had more than four years to create transparency within the organization and explain to the public exactly what it does,” Dickey said. “They have chosen not to do so. Their web site doesn’t include when their meetings are or where they are. If you go to people, they have never even heard of this district. That’s $350,000 of taxpayer money.”

Dickey said his candidacy is part of a concerted effort to shine the light on the little-known agency, pointing out that two candidates who ran, Marc Tancer — chairman of the Libertarian Party of Palm Beach County — and Richard Lee Suverison Jr., were uncontested and took their seats automatically.

“We’re looking to see what we want to do with the district,” he said. “We’ve done this in Seminole County, where we’ve had a majority of like-minded people, and the district flourished and did very well and became self-sustaining. There was another case in Lee County on the west coast, where that group of people decided it was wasting taxpayer dollars and they abolished it.”

Dickey said his main objective is to examine the inner workings of the district.

“I don’t know which path we’re going to take until we get in there, but we just want to create more transparency with the public and reduce any redundancies and see if there’s anything that we can do to improve the district,” he said.

Dickey said that modern farming technology might have outstripped the information and programs offered by the district. “I think one of the things we may end up doing is moving a lot of that education toward urban situation, urban gardening, urban farming type situations,” he said.

His primary goal is to cut government waste.

“We’re not interested, from my perspective, in wasting taxpayer dollars,” Dickey said. “I see waste very often in government, and this may or may not be one of those cases. I do think the district, and I’ve gone to several meetings, could perhaps be run better and more efficiently and with more efficacy, so that’s what we’re looking to do.”

He noted that his being a libertarian has very little to do with what he would like to accomplish with the district. “We’re just looking to create efficiency in government,” Dickey said.

Dickey purchased his first dry cleaning company at the age of 16 while still in high school. He is an investor and heads a dry cleaning franchise company, Nu-Look, and is also a global distributor for a natural foods company. He is married, has no children and has lived in Palm Beach County since 1979. For more information, visit www.karldickey.org.

Webb said the district offers unique programs that do not overlap with other governmental functions. “I don’t know what his intentions are,” Webb said. “I can’t speak for him, but I know that in Lee County, the first thing the Libertarian Party did was fire all the employees. Soil & Water is so important; I would hate to see all the staff fired.”

She said that if Dickey is elected, he will have to commit to fulfilling his obligation to help conserve soil, water and other natural resources.

“I think there is a perception out there by his group, the Libertarian Party, that all government is bad,” Webb said. “If they think something is bad, they should work to resolve that issue. You don’t just dissolve it. That’s just giving up. The purpose of [the Soil & Water Conservation District] is to conserve natural resources. I’m not saying this is him, but I don’t understand the philosophy of running for an office just to dissolve it.”

She pointed out that the district is not a taxing body, and receives most of its budget of under $250,000 a year from grants and some financing from the county.

“We don’t tax anybody,” Webb said. “Soil & Water works on programs to fill a need. Our staff works on several programs that we run.”

“This program actually ran through the Soil & Water Conservation District,” she said. “We recognize that agriculture is not the sole contributor to nutrient runoff. We have other areas where we can improve water quality. We have worked with homeowners also on conserving water through our homeowner irrigation lab.”

The district also works with growers to help them monitor their water use and helps homeowners with sprinkler heads to recognize inefficiencies and make recommendations on how to fix them.

“We don’t go out and make a living fixing sprinkler heads,” she said. “That’s not what we do. We’re not making money selling anything. We go out and assess what they need to do. We work with municipalities, and we have actually been asked by the South Florida Water Management District to assess their water [sprinkler] use. No one else does what we do in the county.”

The district also works with the county on the management of county-owned land.

“The land that the county leases out for farming, we work with growers to make sure they are involved with and utilizing best management practices so that they are not contributing to nutrients and reducing water runoff,” Webb said. “I don’t believe that anyone else can do what we do for what we do it for. It’s very cost-effective, and part of the reason for that is none of the supervisors are paid.”

She added that many of the board members have expertise in the areas of district responsibility. Webb, for example, is with the Florida Farm Bureau, which works directly with farmers on best management practices.

She pointed out that the Soil & Water Conservation District is an advisory and not a regulatory agency. “We’re not threatening,” Webb said. “We’re a member of the community, so we’re able to get out there and talk to them as one of their peers.”