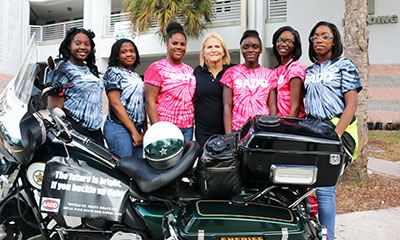 After a surprise seat belt check on Monday, Nov. 3, the students at Royal Palm Beach High School were treated to a Seat Belt Safety Fair two days later in the school courtyard.

The Wednesday, Nov. 5 safety fair, and the seat belt checks, are being conducted at the school in conjunction with contests through the National Organization for Youth Safety (NOYS) and the Dori Slosberg Foundation.

During the unannounced check, passengers, both in the front and back of cars, were checked to see if they had their seat belts on.

Students Against Destructive Decisions (SADD) advisor Maureen Witkowski said that they discovered 43 percent of the occupants were not wearing one, and that most of those without seat belts were sitting in the back seats.

“There is a misconception that if you’re in the back seat, seat belts aren’t as important,” she said. “After our first seat belt check, everyday on the announcements, we put on a safety message schoolwide for them to hear.”

SADD also put posters up around the school to increase awareness about safety.

Crichanni Watson, SADD student president, was torn between being surprised that more than 40 percent did not buckle their seat belts and being optimistic. “I think we can do better,” she said.

One teacher drives a hearse, and brought it to the event at Witkowski’s request. “You have a choice in life. Everything is about choices. If you choose an action, then you have to choose the consequences that go with that,” she explained. “If you choose not to click and drive, this is where you might wind up.”

Reality can be sobering, and the students learned just how easily unbuckled passengers can fly out of a vehicle while watching FHP’s rollover demonstration, which flips at anywhere from 10 to 30 miles an hour to show, using dummies, how small individuals fly out of windows and adults bounce around before flying out, when they are not properly secured in the vehicle.

“I think they’re taking buckling up more seriously,” Watson said, now that they have seen what happens when people are unbuckled.

SADD students came up with a movable billboard, with 24 magnetic boards in circulation. Students are able to stick them to their vehicles when traveling, and teachers are also taking them when going to other locations.

“Click and drive to stay alive” and “The future is bright if you buckle up tight” are the slogans the 70 SADD students chose.

Students took “selfies” to spread the message about being safe, and the picture contest will continue until December, showing that they chose to use their seat belt and arrived safely at their destination.

Posting on Facebook, Twitter and Instagram earns the students points, and if they have the magnet and take it outside Palm Beach County, the students will earn double points.

The programs, Witkowski said, seek to determine what changes occur after two weeks of education, and they go along with contests such as those at www.seatbeltssave.org.

Witkowski, in her third year as SADD advisor, estimates that approximately 75 percent of the school’s 2,000 students perused the fair, which took place during lunch period. Hundreds of kids signed the pledge, she said, which is encouraging.

“It works through peer-to-peer education,” she said. “They focus on alcohol and drugs, traffic safety, and the one thing we’re going to add this year is mental health.”

She recently attended a workshop to learn about mental health, and would like to check the mental health of the student body through an anonymous schoolwide survey.

“Do you feel suicidal? Do you feel depressed? Do you cut yourself? Do you have an eating disorder? Do you have trouble sleeping at night? Are you anxious all of the time?” she gave as examples of questions, explaining that in school, students are checked for their height and weight, their hearing and eyesight, and even for scoliosis. “But, nobody ever asks how you’re doing emotionally. So many of these kids have suffered for so many years.”

During the fair, many students approached Watson asking how to join SADD and to learn more ways to stay safe. “It opened up the group more to the school,” she said.

To join SADD at RPBHS, the first step is to talk to Witkowski. Committing to be alcohol-free and drug-free in high school, and signing a contract, is the second step students must take to join SADD. To learn more, visit www.floridasadd.org.
ABOVE: RPBHS SADD Advisor Maureen Witkowski with SADD students.