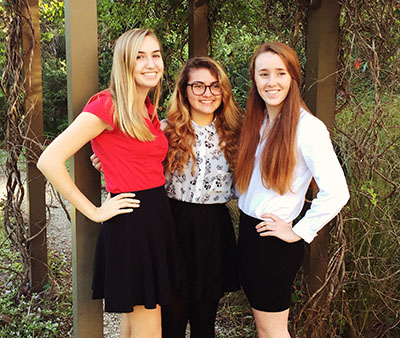 Three Wellington High School juniors have created an initiative that has helped to enrich the lives of farm animals, decrease waste at a local franchise and show other students that they truly can help the environment.

Known as “Save the Pulp,” the idea was inspired by their involvement with the Pine Jog Environmental Education Center’s fellowship program at Florida Atlantic University.

Sarah Sattanno, Miranda Holt and Kelly Cuthbertson are participating in a three-semester program learning about environmental issues. Their goal was to create an environmentally sustainable project for the community to embrace.

As the girls considered a few different ideas, they came up with a feasible concept. “Our project is overall looking to resolve wasteful disposal at Jamba Juice. We’re giving natural food to animals, and we’re supporting local farming,” Sattanno said.

It began with a few phone calls. They called around to markets to learn what they did with produce and food waste. They were told that Whole Foods Market allows pulp from its juice bar to be picked up and fed to farm animals.

“We loved the idea of that,” Sattanno said. “A few people are doing that and going to Whole Foods and making that happen, so we wanted to introduce that at Jamba Juice and make it a program where we could take it to a local farm.”

Contacting Jamba Juice, the girls learned that currently the excess pulp is thrown out, but gained some cooperation. With permission to gather the pulp, now they needed somewhere to bring it.

“When they first called me, I really didn’t know what to make of them,” Milano said. “The first time… my goats kind of put their nose up to it. But the second time they came out, my goats were killing themselves to get to it.”

Milano’s 12 goats each consume somewhere between 3 and 5 pounds of food a day, so adding the vitamin C-rich pulp has been a special healthy treat to supplement their food. “They would come on a Sunday, and I would dole out about 40 pounds of it to half the goats, then the other 40 pounds to the other half the next night,” Milano said. “Then the chickens would go and take whatever was left. There was nothing to clean up, ever… it was totally devoured.”

Life is busy with farm animals, so the girls bringing the pulp to Goodness Gracious Acres has been much appreciated. Milano makes goat cheese, soap, artwork and other things at her farm.

For the girls, their farm experience was one of their favorite things about the project. They gathered eggs from chickens, fed goats and learned about local farming. “I never would have imagined that I’d be going around feeding goats every week,” Cuthbertson said. “It’s not something I pictured myself doing.”

The girls implemented their project during their second semester of the Pine Jog fellowship, Cuthertson said. Over the course of the project, the girls have refined their interpersonal communication skills, group projects, logic and coordination. “What I took away from it,” Cuthbertson said, “was working with other people toward a common goal and not just trying to do it myself.”

“The Pine Jog part of it really taught us the life skills,” Holt said, “but I would say that going to the farm, specifically, we learned about the importance of local farming and recycling.”

They worked well together, Sattanno said, because they all had a different way of handling things.

As they embark on their third part of the fellowship, it is time to transition into making Save the Pulp sustainable.

This is where Wellington High School’s Key Club comes in. With close to 60 students, the Key Club will be taking over for the trio. Right now, they are in transition, handing over parts of the project and training the students on how to perpetuate the project long after its founders leave high school behind.

As they also wrap up their time as Pine Jog fellows, they are crunching the numbers and working on presentations. They determined that each week, they collected approximately 100 pounds of orange pulp. Overall, they each put in 230 service hours working on Save the Pulp. “It feels good to have actually made a difference; to actually see the impact that we’re making,” Holt said.

Sattanno agreed. “I’m glad that we’re passing this on to kids in the Key Club,” she said.

Meanwhile, they created an Instagram account, @savethepulp, and created posters around the school to encourage fellow students to frequent Jamba Juice, in turn, creating more pulp to feed the goats.

Anyone interested in learning more about Save the Pulp can e-mail sarahsattanno@yahoo.com, miranda_holt@aol.com or kellycuthbertson09@gmail.com.