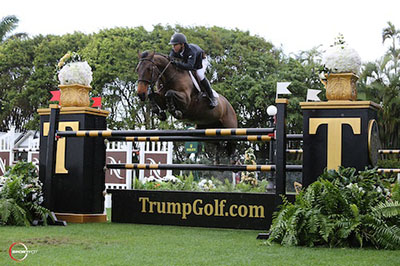 The third annual Trump Invitational, presented by Rolex, will be held Sunday, Jan. 4 at the beautiful Mar-a-Lago Club in Palm Beach.

In addition to world-class show jumping alongside the Intracoastal Waterway, there will be a red carpet entrance, Perrier-Jouët champagne and a poolside welcome reception presented by Suncast and Carol Sollak of Engel & Völkers.

A VIP experience borders the ring and looks out over the water, making the Trump Invitational one of the most unique show jumping events in the world. Several luxury items will also be featured in this year’s live auction.

The co-chairs for the event are Paige Bellissimo, Ivanka Trump and Georgina Bloomberg.

The event will benefit the 2015 Great Charity Challenge, presented by Fidelity Investments, which has raised more than $6.2 million over the last five years for more than 100 Palm Beach County charities. It will also serve as the kickoff party for the 2015 Winter Equestrian Festival, the 12-week circuit that opens at the Palm Beach International Equestrian Center on Jan. 7.

The Trump Invitational is the only equestrian event ever to be held on Palm Beach Island and is hosted at the Mar-a-Lago Club, the former Marjorie Merriweather Post estate built in 1924 and purchased and restored by Donald Trump in 1985. It is one of the most magnificent mansions in the world and is designated a U.S National Landmark.

Following the grand prix is a special invitational junior/amateur jumper class that will highlight some of the top junior and amateur riders in the sport.

Visit www.equestriansport.com or call (561) 793-5867 for more information about the event.