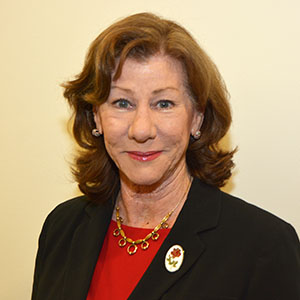 Former Councilwoman Martha Webster is challenging Vice Mayor Dave Swift for Seat 2 on the Royal Palm Beach Village Council, which Webster held until two years ago, when Swift defeated her in his bid to return to the council after an 18-month hiatus.

Webster, 66, has lived in Royal Palm Beach twice, first in 1979. “I moved into a house on Camellia Drive, and my daughter was born three days later,” Webster told the Town-Crier on Monday.

She left the village in 1981 and returned in 1998. “One of the reasons I came back was that it is a wonderful family community,” Webster said. “In 1979, it was a long way away from things… so we made that change, but we came back because of what Royal Palm Beach is.”

Holding a master’s degree in education, Webster returned to work after being a stay-at-home mom and worked for several years at Consumer Credit Counseling as director of housing, two years for the United Way as director of community initiatives and then at the University of Florida’s Institute of Food & Sciences. She eventually got her tenure there while she was the director of the 4-H program. She retired in 2011.

Webster cites returning to college later in life among her top accomplishments. “I left school in my junior year,” she said, “and in my midlife, I went back to school and finished my degree, and went on to get my master’s degree.”

She also thinks getting elected was a top accomplishment. “I never thought I’d do that,” Webster said. “When I was elected after my second try, I jumped in to learn how to be a good representative for the people.”

Webster served five years on the council before losing her seat to Swift in 2013. She made an unsuccessful bid for mayor last year, coming in third in a four-way race.

While on the council, she became involved with the Palm Beach County League of Cities and was appointed to the Treasure Coast Regional Planning Council.

“I think that was an amazing five years, certainly a lot more than I ever expected it to be, and I sure enjoyed representing the people,” Webster said. “That’s why I’m back now. I think I’d like to focus more this time on ‘quality communities.’”

Webster believes that she is the best person to serve on the council because she has a good mix of qualifications.

“One of my opponents has community experience, and my other opponent has endless years as an elected official,” she said. “I can tell you after stepping back for two years, it gives you a good perspective at looking at things in a different way.”

Her goals, if elected, include completing some of the projects already started, especially a senior assisted living facility.

“That is a missing part in the housing component of the village,” Webster said. “I know many people who have had to make decisions regarding their parents or family members, and it’s tough not having a place to go close by that works for them.”

She thinks the parcel under discussion for a senior facility at Commons Park has a lot of positive attributes, including being on a bus line and having the amenities of the park nearby.

“It’s within walking distance of the library and shopping, and close to medical facilities and fire-rescue, so unless somebody can really convince me that another location could do better than that, it looks like a really good fit,” Webster said.

In this campaign, Webster hopes to give the voters a clear view of their choices.

“We’ve got three candidates, one who has a lot of experience and is pulling on all of that experience,” Webster said. “He also states that he almost singlehandedly developed the village. He’s one of five votes, just as I was up there. Then, we have someone who is new, which I think is always a good thing. We want to see new people come in and become part of our council.”

To ease existing and future traffic problems within the village, she would like to contract a traffic consultant to do a complete study.

“I would like to see a consultant come in and take an entire look at the village, what’s coming in, what’s going out, and what roadways need either opening up or widening, or other roads, and begin to prioritize what’s the highest concern, what’s the cost, and start working on a long-range plan,” Webster said.

She thinks Village Manager Ray Liggins has been doing a fine job. “Overall, Ray has a good knowledge of the village,” Webster said. “He has concern for the village and is a resident of the village.”

With a fairly static budget, the village is expected to face rising maintenance costs, such as at Commons Park, but Webster thinks residents want the village to support the park system.

“We all know the parks are not revenue generators. We know that we pay for them,” she said. “We also know that this is something the residents value highly, so they want to see to it that programs continue.”

The village recently sold its former wastewater treatment plant property to Lennar for residential development, and Webster said she would be looking for compatibility with the surrounding neighborhoods when site plans are submitted.

She pointed out that the task force that she chaired wanted open areas, parks and natural areas. She would be looking at the lot size and where they are being placed, and whether there is open space.

“We also have to look at traffic coming in and out,” Webster added.

Asked about any effects the Aldi project off State Road 7 would have, Webster said the initial projection of 300 jobs for the village included construction workers.

“It was my understanding that they keep minimal staff and the actual distribution center would be 90 people, with 10 coming in from their upper management,” she said. “That leaves 80, which is good.”

Webster said she would like to see other large vacant pieces of property filled, and new commercial and industrial development in approved locations.

“There are some great ideas out there and some innovative things that other communities are doing, but our residents don’t want it,” she said. “We need to be aware of what they do and don’t want.”

Webster asserted that the Minto West project approved by Palm Beach County is going to force the village to pay for infrastructure improvements not covered by Minto’s impact fees.

Asked about the status of Royal Palm Beach High School and what the village can do to help, Webster said Principal Jesus Armas has done a wonderful job at the school. “He listens to the people,” she said. “He seems to understand what it takes to improve the school.”

Regarding a charter high school that has been proposed across the street from the public high school, Webster said that she has heard a lot of pros and cons about charter vs. public schools and she looks at charters from the standpoint of whether it would better the village. “There is a segment of families that want their children in charter schools,” she said.

Asked why she chose to run for Seat 2 in a three-way race rather than Seat 4 held by Councilman Fred Pinto, who went unopposed, Webster said she favors term limits. Although Swift has technically held the seat for only two years, he has been on and off the council for more than two decades. “I think that sitting there too long is not a good thing,” she said.

Webster pointed out that she has been endorsed by Mayor Matty Mattioli and former County Commissioner Jess Santamaria.

“I think it’s important to say that David [Swift] came on under the auspices that he could do better than me, and now, here it is two years later, and they’re not supporting him,” she said. “They don’t seem to care to work with him any longer.”

Webster said voters should vote for her because she has the energy, commitment and heart to work for them.

“I bring with me some very good experience both on the community and governing side,” she said. “I don’t get angry, and I don’t hold grudges. There’s misunderstandings, but we’re all working for the village.”