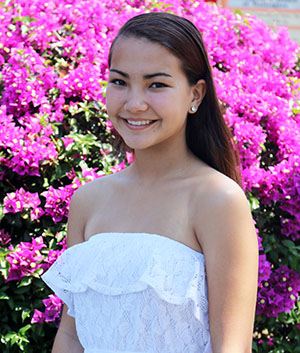 At just 14 years old, local singer, songwriter, actress, dancer, model and photographer Adrianna Siena is getting attention and recognition for her talents.

“When I was younger, my mom wanted me to try everything just to see what I like, and I enjoy doing everything else, but singing kind of stuck with me,” Adrianna said.

While she has been singing since age 2, the turning point for Adrianna was a few years ago, when she used to sing with her mother, Lani, and her older sister, Annelisse.

Annelisse decided she was no longer interested in singing and chose to pursue golf. Adrianna almost changed her focus to golf but chose a different direction.

She only dithered “because I used to do everything my sister did,” but decided she liked singing more and didn’t want to stop.

“I like singing more than I like anything else because it allows me to express my emotions in not so many words… it just feels like a big weight lifted off of me. I just feel free when I sing,” Adrianna explained.

Her parents, Lani and John Siena, are thrilled with her decision to stay in the performing arts.

“One of the joys of being a parent is having the opportunity to see that your child has been blessed with a tremendous amount of talent,” Lani said. “We are very proud of Adrianna and her commitment to her art. Adrianna has been performing since she was a baby.”

While improving her singing and acting, Adrianna would also like to accompany herself by adding different instruments such as piano and guitar.

Her grandmother, Kathy Siena, also has a talent in the performing arts, and has been helping Adrianna.

“I think she’s a very good performer. She knows how to perform when she gets onstage,” Kathy said. “She’s confident and amazing, has an incredible memory, and she can get up on the stage and perform even if she’s sick.”

Kathy, a performer too, has been Adrianna’s piano teacher and is focusing on teaching her chording. “I’m a singer, too, and that was very helpful to be able to coach her a little bit on some things,” she said.

Kathy moved to Florida almost seven years ago, within weeks of when Adrianna moved here. Previously, Adrianna had lived in London and Chicago, and was born in Hong Kong.

For the last two years, she has been working with voice coach, manager and producer Mike Soper of Mike Soper Music, honing her skills, practicing and competing.

“I look at Adrianna as someone who has the full package,” Soper said. “She has the talent, her voice, she has a range that soars, and she can also hit the low notes that a lot of female vocalists are unable to do. She is a music theater major at her school. What I love about Adrianna is her drive and passion to become the best. I think her future is limitless.”

The Voice and American Idol auditions are in her future, Soper said. “We’re preparing her for that and taking the right steps for when she is old enough to be able to be booked at events more frequently. She’s coming into that age right now where she’ll be headlining.”

At 14, Adrianna is young for the music industry, but she is using the time to her advantage.

Adrianna has performed in numerous shows with various theaters in Palm Beach County and beyond. She was young Cosette in Les Misérables, the Queen of Hearts in Wonderland, Flounder in The Little Mermaid, Sandy in Grease, Glick in Snow White, Little Red in Into The Woods, Annie in Annie, Viola in Adventures of a Comic Book Artist, Tracy in Hairspray and an understudy in The King and I.

In addition to acting, Adrianna has performed in many singing competitions in the past few years. In 2013, she was a runner-up in Starz of the Future, won first place for her age group and first runner-up overall in Wellington Idol, and was part of the Critics Choice Trio with the International Thespian Society.

In 2014, she sang at the AT&T Young Stars Showcase and performed at Carnegie Hall in the American Protégé International Competition, winning first place for performance. So far this year, Adrianna has performed at West Fest at Royal Palm Beach Commons Park, was the grand prize winner for Starz of the Future at the South Florida Fair, was the first runner-up of Future Stars by the Boca Rotary Club and is currently competing in 2015’s Wellington Idol.

“That was the first time I ever performed in front of a lot of people,” Adrianna said of her first competition at Starz of the Future in 2013.

In addition to singing and acting, Adrianna has a multitude of special skills that are helping to prepare her to take the entertainment industry by storm. She can cry on cue; speak Korean; perform acrobatics, stage combat and contortions; knows tae kwon do, video editing and cinematography; is a photographer; and has an equestrian background.

“I want to be on a TV show, or in a movie — it would be really fun — then after that, progress into being a singer like Selena Gomez did,” she explained.

Now in ninth grade, Adrianna is attending the Dreyfoos School of the Arts as a theater major, advancing quickly in her craft.

Shortly, Adrianna will be releasing a single, Set Me Free, which was co-written by Soper and showcases her pop country side by featuring Nashville guitar and bass.

“It’s about a girl who likes a guy,” she said, “but he’s not really liking her back, so she wants him to set her free from that feeling, if that’s possible.”

Pop and R&B are the genres Adrianna gravitates to, which will be apparent in some of her other songs that she is working on.

Adrianna has already advanced to the semifinal round of Wellington Idol. Semifinals and finals take place Friday, March 27 and Saturday, March 28 at 7:30 p.m. at the Wellington Amphitheater.

ABOVE: Adrianna Siena recently won the Starz of the Future competition at the South Florida Fair.