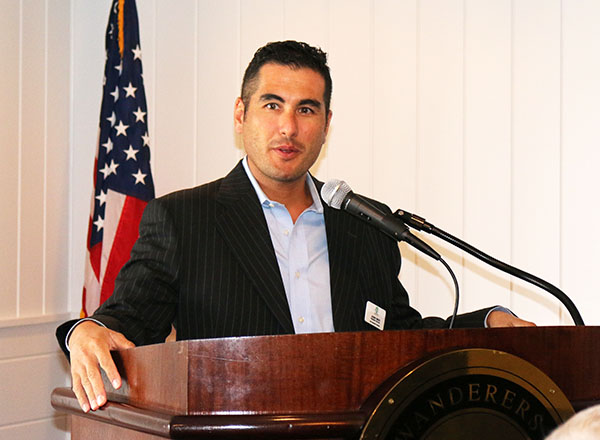 The Wellington Chamber of Commerce swore in its 2015-16 executive board members and directors during a luncheon at the Wanderers Club on Wednesday, welcoming Johnny Meier of My Community Pharmacy as the chamber’s new president.

Councilwoman Anne Gerwig swore in the incoming board members.

“You guys do have a great responsibility, and I know that you understand your obligations,” she said. “I’m very proud to be a member and a part of this organization.”

Executive board members include Meier as president; attorney Alec Domb as chairman; Dr. Randy Laurich of the Wellness Experience as immediate past president; Bill Tavernise of Realty Elite of the Palm Beaches as vice president; and Dale Grimm, CPA, as treasurer.

“It has been a thrill to be the president of this chamber,” Laurich said. “We represent each and every one of you. Part of the commitment of the chamber is to help [members] to build your business and to prosper and to grow together.”

Laurich noted that many of the goals he set for the chamber have been met. There are more committees, and the committees have been expanded. There is a stronger real estate presence in the chamber, and there are more medical professionals. He was also proud of the wonderful turnout last year for Flavors of Wellington and Winterfest, both held at the Palm Beach International Equestrian Center.

“I’m so glad that I had the opportunity to represent each and every one of you. I’m glad that I still get to make the commitment as a member of the board of directors, and I’m so thrilled that I get to hand the torch over today to Johnny Meier of My Community Pharmacy,” Laurich said. “He’s a great friend of mine, a very respected individual in the business community, and I value his opinion greatly.”

Meier thanked the board of directors for electing him to carry on the chamber’s goals.

Surveys are being conducted, Meier explained, to determine what members want from the chamber.

“I want to see nonmembers coming to our luncheons, to our events, to our committees,” he said, explaining the benefits of attending various functions and making community connections. “The chamber is going to give you what you put in, and then some.”

Nelson said that the PAC will be active in local politics.

“If there are people in office who are not supportive of the business community, of the equestrians, of betterment of K-Park, of the medical arts district — they don’t need to be there,” Nelson said. “Those are the lifeblood of this community, and we need to protect that. The other part of it is for the PAC to fight against the policies and procedures that might not be beneficial to the business community.”

Goad practices all aspects of general surgery, and, he explained that the field has been revolutionized with advanced laparoscopic and robotic surgeries.

Audience members were curious about robotic surgeries, and Goad was able to explain that he can perform a gall bladder surgery in 17 to 28 minutes, which shows just how efficient the surgery can be when utilizing newer technology.

“We’re the first generation to be raised on video games. Studies have shown that we’re the ones who are already mentally and dextrally prepared for this,” Goad said, explaining that using the robotics is extremely similar and helps decrease recovery time.

Singer specializes in pediatric hematology oncology. “I care for children from birth to about age 21 with any kind of blood disorder, whether it is sickle cell anemias, clotting disorders, bleeding disorders and then children who have cancer,” she said.

Addressing a common local concern, Singer discussed the so-called cancer cluster in The Acreage, explaining that studies have shown there is no such thing.

“There were no widespread contamination or other potential environmental risk factors found,” she said, explaining that one study looked at 13 cancer patients and 13 people who didn’t have it, and looked at 171 variables. Only seven variables were of statistical significance.

“Really, they couldn’t gather anything, and at this time, we found nothing to be relevant, or the Department of Health found nothing to be relevant as far as is there a cancer cluster in this area,” she said, explaining that South Florida, in general, has a high instance of childhood cancer, but that is most likely due to the size of the general population. “The proper studies were done, and everything was undertaken to really make sure that there was nothing out in The Acreage.”

Pliskow, an obstetrician, has been in the community for 26 years. Aside from his normal practice, he is also one of only 83 forensic obstetrician gynecologists in the country.

Pliskow presented several rare cases that have come through South Florida, and explained that awareness and quick action are incredibly important. One such example was an extremely rare reaction to Motrin, where the skin shows a blister as an allergic reaction that quickly escalates.

“We petitioned the FDA… about six or seven years ago to change the labeling of these medications because they don’t really give enough of a warning,” he said, noting that the petition went through and the FDA has made changes.

With the rash, fever, pain and other reactions, parents often give more Motrin, which makes the patient worse. Once you stop it, it goes away, Pliskow said, so being educated about the side effects of medications is imperative.