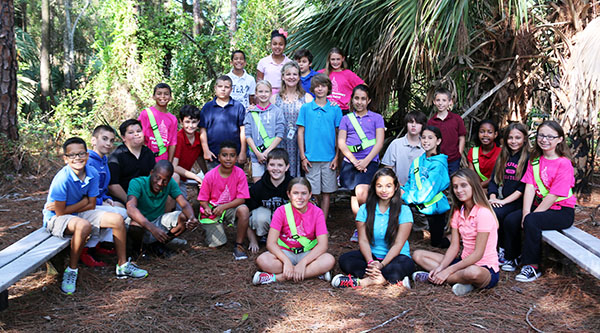 The 31st annual William T. Dwyer Awards for Excellence in Education ceremony was held Wednesday, May 6 at the Kravis Center for the Performing Arts.

The honor was particularly special to Mills, and not only because she was nominated by her fellow teachers at Wellington Elementary School and went on to win the award, but because she has family ties to award namesake William T. Dwyer, former vice president of Pratt & Whitney in the Government Products Division and founding president of the Education Foundation of Palm Beach County.

“My father-in-law was Tom Mills, superintendent of schools in Palm Beach County for 13 years,” she explained. “He was right there with William T. Dwyer when they set up this educational foundation. He [Tom Mills] was always considering the teachers. He was here that night, and I think that it was very touching for him for a family member to receive it.”

Mills loved working as a guidance counselor, but eventually the call to teach in the classroom pulled her back.

“I was really missing that creativity,” she said. “I just felt like I really wanted to go back and be with the students and do active teaching, because I love that.”

Her favorite subject to teach is science.

“A lot of kids, when they come to me, say they don’t like science,” Mills said. “It’s really fun to expose them to all those concepts that are so intriguing. I just love for them to learn about the world around them.”

At each school, Mills explained, someone is nominated for a Dwyer Award, as is someone from special programs.

“This year, the special programs person was Eileen Sweeney, who was my co-teacher. Mrs. Sweeney died this year, so that was really hard. She had Stage 4 colon cancer,” Mills said. “At the Dwyer Awards, they recognized and remembered her for her dedication. It has been bittersweet, because she was supposed to be at that ceremony with me, and she wasn’t.”

Mills had promised Sweeney that she would do everything she could to win the award.

Dr. Maria Vaughan, Wellington Elementary School’s principal, is thrilled for Mills. “It’s not only just joy for Kelly Jo, it was joy that she was able to fulfill that promise to this beloved teacher that we had here at the school,” Vaughan said.

Recognition and awards are not new for Mills. She received the Palm Beach County Elementary Guidance Counselor of the Year Award in 2004, has acted as liaison for the Five-Star Award, was the Home School Connection chair, lead teacher for the Palm Beach County Literacy Rollout and more. She even works on Florida State Standards parent training.

Mills found out that she was one of the top five finalists in Elementary Education last month, but she had to wait until May 6 to see if she would win.

“It was a great night,” she said. “The whole process, filling out the application and uploading pictures and creating the resume… all of that really caused me to reflect on my career with the Palm Beach County School District. I found myself thinking through all the years of all the people who have helped me — the people I’ve teamed with, the leaders who have helped me to be who I am, students who impacted me in a way where I’ll never forget them… That was a really nice part of it.”

While reflecting, she realized that her West Virginia heritage played a large part in her success. She was taught to be a resilient, hard worker.

“It’s how I was raised,” Mills said. “My father was a coal miner who worked very hard; my mother was a teacher who I had in 12th grade. They’re just very hard-working people who passed it on to me to give back and to do your best.”

Mills’ students watched the awards online and were thrilled for her. The next day, she was supposed to be at a workshop but stopped by the school and was greeted by a classroom of enthusiastic children.

She shared the entire process with her students. “I think it taught them to go for it. If there’s something that you really, really want to accomplish, go for it. They were just thrilled,” Mills said.

Her principal believes the committee made the right choice. “She deserves it,” Vaughan said. “She really cares about the kids.”

The accomplishment, and recognition, also reflects well on the school. “We’re very, very excited about Kelly Jo winning the Dwyer Award,” Vaughan said. “It’s not just an accomplishment for her; we feel it says something about our school as a whole and the quality of teachers that we have here at Wellington Elementary School.”

As teachers, Mills explained, there are many rules, regulations and guidelines to follow, but, in the end, one needs to do what’s best for the children.

“The people who have taught me to how to educate kids through their trials and experience, that’s what I’ve learned works best,” she said.

Mills’ strategy and approach seems to be working for her.

“She’s an absolutely amazing teacher,” Vaughan said. “What’s great about Kelly Jo is that she just doesn’t care about the kids’ academics and how well they’re doing, she cares about them, as a whole, and does whatever she can to make sure she meets the needs of the whole child.”

When Vaughan goes into Mills’ classroom, she is always greeted by attentive, engaged students who are completely immersed in her lessons, which is a testament to Mills’ skills.

“The kids and parents were so excited,” Vaughan said, upon discovering that Mills won. “It was a momentous day, not just for Kelly Jo and her family, but for the whole Wellington Elementary School Wildcat family.”