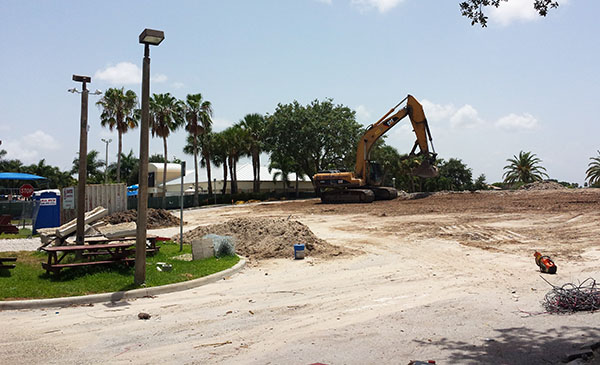 The Wellington Village Council plans to discuss the design of the new Wellington Community Center during its meeting Tuesday, July 14.

Councilman Matt Willhite questioned the final design at the council’s last meeting, saying it did not look like what they had originally approved.

Willhite said the final design looks “institutional,” with a planned back patio overlooking Lake Wellington mostly removed, square footage reduced and amenities including a stage no longer in the plans, apparently due to cost-cutting attempts.

The discussion is not expected to delay construction of the new building, which is targeted for completion in the spring or summer of 2016.

Demolition of the old building began last month. Current plans for the new two-story, 26,000-square-foot facility call for an Internet lounge, three multi-purpose rooms for weddings and events, a fitness room, a conference room, a room for arts and crafts, a baby/tots classroom and a warming kitchen.

Also next Tuesday, the council is scheduled to approve a preliminary Truth in Millage (TRIM) ad valorem property tax rate of 2.45 mills for the next fiscal year. The rate is the same as last year, but above the rollback rate of 2.24 mills.

The council will also consider approving the same Acme Improvement District drainage assessment rate as last year of $230 per unit, and an assessment of $140 for curbside solid waste disposal and $105 for containerized service, which is $20 less than the current rate of $160 and $125, respectively.

Consideration of the final recommendations from the Charter Review Task Force is also on the agenda. The task force forwarded six questions to the council for consideration to be put on the March 15, 2016 ballot.

The first question is whether to allow a simple majority vote to approve council compensation. The original charter requires at least a 4-1 supermajority vote.

The second question asks whether council vacancies should be filled in the same manner as mayoral vacancies. The current charter treats the filling of mayoral and council vacancies differently. The proposed amendment would fill all vacancies by providing that they not be filled if less than 180 days remain in the term, and require a special election if 180 days or more remain. The question also provides that the vice mayor will serve as mayor until a new mayor is elected.

The third question asks whether the requirement for calling special meetings should be changed. The charter currently allows the mayor, or in his absence, the vice-mayor, or a majority of council members to call a special meeting upon 72 hours’ notice. The proposed amendment would require notice of special meetings in accordance with Florida law, which only calls for “reasonable notice.”

The fourth question asks if a provision in the charter should be removed that allows for a referendum if the adopted millage rate exceeds 5 mills. The task force determined that as written, that charter provision is unenforceable. While originally intended to keep the tax rate low, such a referendum would be without effect and could result in a waste of taxpayer money, the task force concluded, and Florida Statutes and the charter already provide other means to challenge the tax rate.

The fifth question asks whether the schedule for transition from an independent special district to a municipality should be removed, since the process has now been completed.

The sixth question would provide for inclusion of the Equestrian Preserve Area in the charter. The original charter makes no reference to the Equestrian Preserve Area, since it did not exist at the time. The proposed amendment would permit landowners to apply to be voluntarily included in the preserve upon a majority vote by the council, but would prohibit removal of properties from the preserve area without a supermajority vote.

The council can also add referendum questions of its own choosing.

ABOVE: With demolition work on the old Wellington Community Center nearly complete, work is underway to prepare the site for a new building to be completed next year.