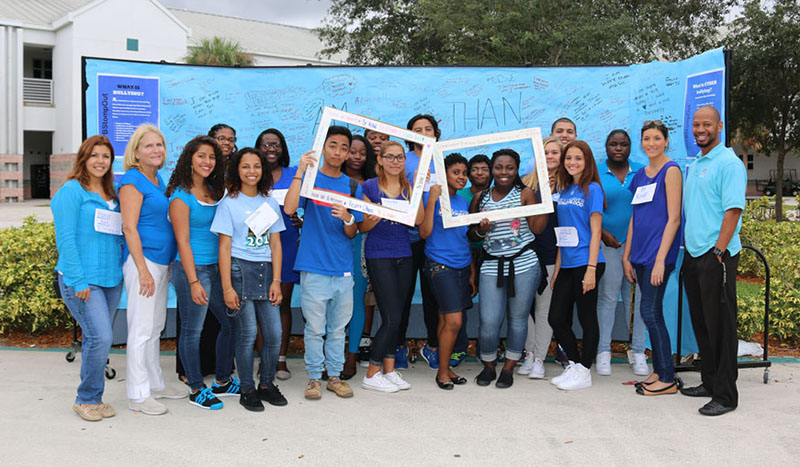 Students at Royal Palm Beach High School wore blue Monday, Oct. 5, as they participated in Blue Shirt Day: The World Day of Bullying Prevention, created by Stomp Out Bullying, a national anti-bullying organization. The goal was to heighten awareness of bullying.

“Our school takes bullying very seriously, and we wanted to get the students on board to realize that what they say, or post, can be very detrimental to others, and sometimes to themselves when applying for colleges and for a job position,” Witkowski said.

“I think anytime you can bring awareness to an issue as important as bullying… that’s obviously important,” he said. “More than that, it needs to be grassroots. The students need to be the leaders on this. They’re the ones who need to take initiative.”

SADD President Crichanni Watson, a senior at RPBHS, agreed, explaining that SADD is a student group that utilizes peer-to-peer education.

“It’s more understandable when your friend is telling you than an adult telling you,” Watson said.

This year, SADD is focusing on its anti-bullying campaign and a mental health campaign, in addition to its focus on traffic safety, Witkowski said.

Watson hopes that with the increased focus on anti-bullying, more people will understand the dangers. SADD, she explained, will be presenting more information throughout the month to teach students about the negative impacts of bullying.

“Bullying is important because a lot of lives are lost due to it,” Watson said. “We have to spread awareness so that people know the dangers of it.”

The skies were bright for the first two lunch periods of the day. In the morning, teachers were asked to choose one of 12 sayings to wear pinned to their shirts. The students then spun a wheel with those sayings and had to try to toss a bean bag into the hole with the corresponding saying.

There was a giant mobile wall, with a blue backdrop, where students were encouraged to write how they felt. Frames, with positive messages, allowed students to take pictures, which they were then encouraged to post online. Anti-bullying student artwork was on display, and all of the SADD students happily participated.

By the time the third lunch period rolled around, so did the storm clouds. But the rain did not deter the SADD students from spreading their message.

Bullying, Armas explained, is not new, although the increased focus is.

“For too long, we turned a blind eye to bullying,” he said. “It’s important for us now to make sure that every student feels safe. The important thing about this is that the bullying, in the past, used to end when kids went home. Now, with cyber-bullying, it’s 24 hours, in their faces, if they’re getting bullied.”

The approximately 1,000 students who experienced Monday’s activities came out knowing more than they did going in, with a better perspective.

“I’m proud of our student body and our staff. I’m proud of how they are and the things that they do for each other and for our community,” Armas said. “I’m not surprised by this at all. Every time we do anything, whether it is donating or charity or helping each other out through crisis or bullying prevention… our students always step up. They always do. To me, it’s not a surprise, it’s normal, and it just validates how proud I am of them.”

For Witkowski, it was important that the students stopped and focused during their lunch period. “They’re tired of being put down for insignificant things,” she said, reviewing some of the things written by students on the anti-bullying wall.

Some students wrote that they were more than a pretty face, more than someone else’s best friend, more than the tall guy in class, and other personal insights.

As Armas watched the students writing on the wall and participating in SADD’s campaign, he explained that there are many goals of anti-bullying activities, and that opening the lines of communication is critical.

“I think the impact of anything we do on campus [about bullying] has to do with the fact that we want to make sure that our kids are telling the adults about it,” he said. “When you bring the awareness, that’s what’s important. We want the kids not to be silent.”

Students need to recognize what bullying is, and for witnesses and bystanders to help victims rather than sit idly by, Armas explained. The victims, he said, need to come forward.

“The main thing is talking about it, telling an adult and helping each other out,” he said. “It’s important for all of us to make it important.”