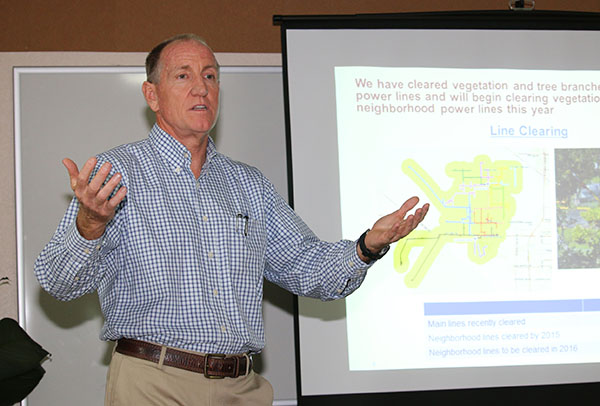 The meeting was spearheaded by longtime resident Ken Bell, who has frequently experienced electrical problems.

“We were having as many as 30 outages, glitches, surges, whatever you want to call them. FPL has a name for all of them, but I call them interruptions,” Bell said. “We were getting many of them. I was on the first-name basis with the representative from the Public Service Commission in Tallahassee.”

Things improved, then got worse. Bell was given reasons such as squirrels and trees for the interruptions.

“It just got to the point where I said, ‘How many people are really affected out here?’” Bell said.

He found that many other residents were having similar issues.

“This is where we’re at. We all have our issues. I’m going to turn the meeting over to T.L. Winder,” Bell said. “I know we’re frustrated. I know we may be angry. These gentlemen with FPL aren’t the reason we’re having problems. They’re here, hopefully, to solve our problems. They will hear our complaints, hear our grievances, and hopefully, if we’re patient, they’ll correct our problems.”

Winder, FPL’s operations manager for the distribution side, thanked Bell and Lillian Hall for putting the meeting together and giving the five FPL representatives — Winder, Chris McGrath, Bill Orlove, Stephanie Mitrione and Juan Khoury — the chance to speak face-to-face with customers.

“I think we see this as an opportunity to listen, and to understand some of the issues that you’re facing,” Winder said. “Part of this will be a takeaway for us to do some things… I’ll be sharing with you some things that we’ve done, and I would expect that things are getting a bit better than they were during the summer.”

Before Winder began his presentation with an overview of power interruptions, electrical infrastructure, reliability improvements completed and planned, and the next steps, he assured the residents that FPL understands their concerns.

“We’re not going to be here tonight to say there are no issues. We get it. I get it. There are some things we need to do better,” Winder said. “Part of what we have done is set things in motion, in addition to what we normally do.”

Flickers, he said, are interruptions lasting a minute or less, and are likely caused by something that comes in contact with a power line, such as a tree branch. The system, he said, allows the flicker, rather than having an outage — where power is out for more than a minute.

Vegetation, large vehicles and vandalism are big causes of power interruptions, as are the 10,000 or so lightning strikes in the area.

The company, Winder said, has been working on strengthening its facilities since the devastating hurricanes in 2004 and 2005. Since 2006, he said, they’ve inspected and tested all 1.2 million poles in FPL’s territory.

There are efforts in the works to use smart devices to minimize outages, decrease the time it takes to restore power and minimize the number of people impacted by outages.

He then spoke specifically about FPL facilities in Loxahatchee and The Acreage. Winder noted that facilities along Okeechobee and Southern boulevards are being strengthened.

The lines serving gas stations, supermarkets and other key buildings, such as police stations, fire-rescue stations and hospitals, have been made some of the first places to receive service post-hurricane, Winder said. That way, even if your home doesn’t have power, the infrastructure will be there to get the community back up and running.

Florida is a subtropical environment, and FPL does the best it can to keep up with it, Winder said. One hundred and seventy miles of main lines have been cleared. Neighborhood lines, now being trimmed, will total 173 miles. In 2016, 74 miles of neighborhood lines will be cleared.

“That will get us almost everyone within our trim cycle,” Winder said, explaining that lines in The Acreage that have been cleared will now be inspected.

By early 2016, he said, advanced infrared technology inspections on all main lines will be completed, and visual inspections have been completed on the 15 main power lines.

Automated feeder switches on 11 main lines and 174 automated lateral switches on neighborhood lines allow FPL to isolate trouble spots, reroute electricity when needed, and automatically restore power if there is a power failure.

“There are more here than in most other places,” Winder said, referring to the new technology.

The switches were added in the area to expedite the solving of power problems. “It can detect the outages and will automatically switch back and forth and isolate the number of folks affected,” he said.

Last week, settings were altered to increase the reliability of electricity for residents, Winder said. The programing, he explained, has been tweaked, and will continue to be tweaked as FPL learns what does and doesn’t work.

“It’s pretty neat stuff,” he said. “We’re using this so much that we have a facility in West Palm Beach that is manufacturing them.”

In the future, FPL will continue to monitor the reliability in the area, continue clearing vegetation, install additional automated lateral power switches and provide updates to residents about the work that is occurring.

“We’re going to continue working with you guys. Working for you is proactive. When we identify things on our side that are not working well, or are broken, or not performing where they should be, we’re going to be taking action,” Winder said. “We know we have got to work with you all, and I think together we can make a difference.”

Winder promised that FPL would invest whatever is necessary to upgrade the power system in Loxahatchee and The Acreage.

“I know that the folks that I work for are investing a lot in the infrastructure to make an improvement,” he said. “There is an opportunity for us right now to spend a significant amount to improve the infrastructure across the state, including right here. All that aside, we’re doing more now than we have done in my entire career.”

Winder extended an offer to residents who were present to provide their contact information to have their individual power issues investigated.