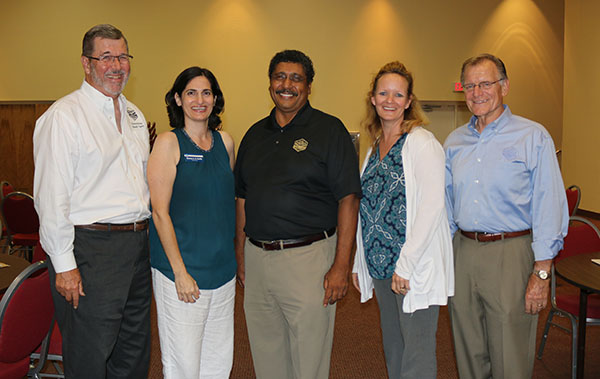 Royal Palm Beach lent its figurative ear to the community on Tuesday, May 3 during its annual Citizen Summit, designed to gather public input for when it is time to review and add to the village’s Strategic Plan.

“We are very pleased to welcome you this evening,” Mayor Fred Pinto said. “This is the fourth year in a row; our fourth annual planning process. About four weeks ago, the Royal Palm Beach Village Council got together with our consultant, Lyle Sumek, who is going to be facilitating the process this evening. We went through our strategic planning process. What we are going to be doing tonight is the output from that process. We really, really want your input and thoughts on that.”

Additionally, Pinto continued, the village wants input on what it should be focusing on in the next 12 months, as well as four or five years out. Pinto asked for feedback about whether participants thought the village has items in the right order of priority, and what is missing from the list of priorities.

Approximately a dozen village officials, including the full council, took turns joining seven resident groups conducting three rounds of brainstorming. By the end of the summit, despite a power failure that lasted almost a half-hour, about 50 people had participated in the 2016 Citizen Summit.

The turnout was about what Pinto expected and was roughly average for the turnout in previous years. The council sent out invitations to those in committees and groups, as well as people who participate within the community, and approximately 30 from among those invited participated.

“I would love to have more turnout always, but I’m not disappointed in what we have,” Pinto said. “I really want to encourage every person in the village; they’re all invited. It’s not just the people who got a specific invitation.”

Village Manager Ray Liggins stressed that the role of staff is to listen. “We really do get a lot out of hearing the conversations at the different tables,” Liggins said. “We’ve been working on this since probably the end of January, and we do it at our offices across the street. Hearing what you have to say about it really does help us in finalizing the plan and developing future plans.”

Residents were asked about the village today, in the future, and for next year, through eight questions:

• What are the major successes for Royal Palm Beach during the past year? Residents suggested the sale of the Crestwood property, getting aquatic vegetation in canals under control, improving and maintaining the quality of services, landscaping, a dog park at Royal Palm Beach Commons Park, getting Royal Palm Beach debt-free and more.

• Why did you make the choice to live in the Village of Royal Palm Beach? Residents highlighted parks and recreational programs, a low crime rate, schools, housing, the neighborhood feel and more.

• What are the best methods for the village to communicate with you? Residents suggested using an electronic billboard, social media, a reverse 9-1-1 system, text blasts, e-mail blasts, the village’s web site, the Town-Crier, television and other avenues.

• What would make the Village of Royal Palm Beach more livable to you? Residents suggested improving Royal Palm Beach High School, adding lighting in some areas and decreasing it in others, traffic enforcement and control, keeping taxes low, maintaining parks and other actions.

• During the next year, 2016-17, the Village of Royal Palm Beach needs to address or complete ___. Residents suggested reexamining the citizen advisory boards for diversity, working on a stormwater master plan, an organizational audit, Palm Beach County Sheriff’s Office community enforcement, traffic monitoring and enforcement, landscaping codes and other things.

• If you were a wizard and could change one thing in Royal Palm Beach, what change would you make? Residents suggested adding more cultural arts; cleaning canals in the village; eliminating taxes; building a botanical garden, community vegetable gardens and solar panels at parks; and more.

Attendees were also given the opportunity to write an open message to the mayor and council on an index card, either providing their names or remaining anonymous.

“Many of the things that we talk about tonight will be more than one year. I know last year, one of the topics that came up from a couple of groups was a La Mancha drainage issue. That is underway. It is being worked on,” said Sumek, the consultant. “Things like that do get built into the process. It may take time to design it; it may take time to get the funding in place. Not all of these things will be accomplished in one year.”

The results from the evening will be compiled by Sumek and released in approximately two weeks.

“I’m looking forward to new ideas, particularly on the prioritization,” Pinto said. “A few years back, we came out of this session and realized that we really have to prioritize our efforts for a senior citizen facility. It was the input that we got from this session that we really need to move that higher up on the list and get that moving.”

The report will provide insight into trends; bring to light direct, organized, structured input from the citizens; and let the council know what the citizens feel are notable achievements.

“Last year, a priority was the senior living complex. Work has been done on it. It will continue on. The senior housing ordinance was adopted, which was a priority. The millage rate was addressed,” Sumek said.

“If you look at it, 70 percent of the things were completed from last year,” Sumek said.

Events such as the summit, Pinto said, constitute local government in action.

“I don’t think the document would be complete without their input and their information. This is what we found to be the best way to get it,” Liggins said.

Public input provides suggestions and comments that staff might have missed, he said, and sitting at the table gives an additional opportunity to talk and meet with residents.

“It is important for citizens to give input into the strategic planning process, since it is creating the future for the community,” Sumek said. “It starts to define what they feel is important and to provide a framework for issues and actions for the next year.”

Over the years, Sumek said he has seen that approximately 80 percent of the actions have been addressed or significant headway was made on those issues.

“There are tangible results that I think have added value,” he said.