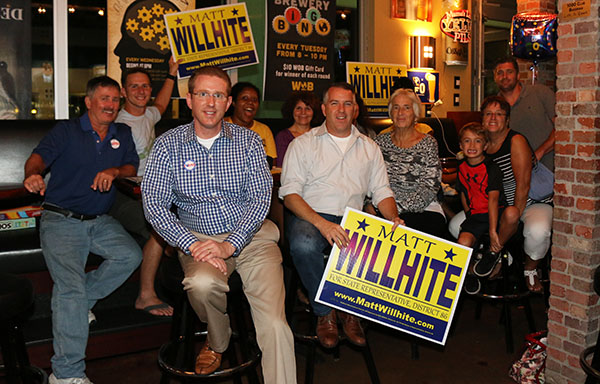 When the Florida Legislature convenes next year, there will be new people representing the western communities. Who those people will be became clearer when the primary election results came in Tuesday night.

In the race to replace term-limited State Rep. Mark Pafford in District 86, which includes all of Wellington, Royal Palm Beach, Loxahatchee Groves and several communities to the east, Democrat Matt Willhite will face Republican Laurel Bennett in November.

Willhite is excited and happy to be the Democratic nominee.

“Obviously, it was a good race; it was a good, contested race. I appreciate my opponent Tinu Peña’s candid debate and hard work. I think she’s an asset to the community and I appreciate her staying on the issues during the campaign. I look forward to working toward the general election on Nov. 8 and becoming the new state representative for District 86.”

He thanked his family, his campaign team and all of his supporters.

Bennett described her feelings about the election results as “elated, wonderful, happy.” She plans on taking a few days off before hitting the road and continuing her campaign.

She also wants to make connections, get educational bills started, help repeal Obamacare and see how she can help serve in Tallahassee.

“Thanks to my team and the voters and the people who believed in me and helped me along on this journey,” Bennett said. “They are what made this possible. I can do all of the work, as far as the bills and the legislature, but I represent them and without them, I would be nothing. I just want to say ‘thank you’ to them.”

The District 29 State Senate race featured State Rep. Kevin Rader, a Democrat, receiving 58.46 percent (24,546 votes) to Democrat Mindy Koch’s 41.54 percent (17,445 votes). Since no one else filed to run, Rader has been elected to the seat, which includes most of Wellington.

ABOVE: Matt Willhite (center, holding a sign) celebrates with supporters at World of Beer in Wellington after the election returns came in.