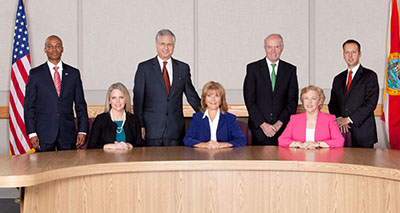 The Palm Beach County Commission postponed a final decision on the Iota Carol/Delray Linton Groves development, along with the project’s proportional share agreement, at a transmittal hearing held Monday.

The approval would allow a density increase from rural residential one unit per 10 acres to up to 0.8 units per acre for a total of 1,030 housing units, 112,000 square feet of commercial space and up to 112,123 square feet of community uses on the 1,288-acre site west of 190th Avenue North off 60th Street North, west of The Acreage.

The commissioners transmitted the project to the Florida Department of Economic Opportunity in November by a 4-2 vote with Mayor Paulette Burdick and Vice Mayor Melissa McKinlay opposed. Included was a new designation of “western communities residential” that allowed the density increase.

The site is almost completely surrounded by GL Homes’ 4,872-acre Indian Trail Groves project, which was approved in September for a similar density, allowing the development of up to 3,997 homes and 350,000 square feet of commercial use. To the south is Minto’s 3,800-acre Westlake project.

Other major residential projects nearby include the Highland Dunes/Arden development, approved in 2005 but just now getting underway, and the Avenir project along Northlake Blvd., approved recently by the City of Palm Beach Gardens.

Ken Tuma with Urban Design Kilday Studios, representing Delray Linton Groves, said that over the past week, they had had several requests regarding transportation numbers and how it affects the surrounding off-site roadway network.

“We’ve met with several of the commissioners asking specific questions. Our transportation engineer has spent a considerable amount of time going through those numbers,” Tuma said. “We have got to the bottom of those numbers, but we have not had the opportunity to have those vetted by the county engineer, so I’m not comfortable presenting those until he has been given that opportunity.”

After several members of the public expressed opposition to the postponement, McKinlay made a motion not to postpone transmittal, which was seconded by Burdick for discussion.

Commissioner Steve Abrams made an alternative motion to postpone the hearing to the April 26 hearing, which was seconded by Commissioner Mary Lou Berger.

Commissioner Mack Bernard asked County Engineer George Webb how long it would take for him to review the traffic numbers.

Berger said the letter from the developer simply said they had asked for a postponement to April 26.

Tuma said the April 26 second-round meeting is the most appropriate time to which the amendment can be postponed.

“This has been transmitted to the [Department of Economic Opportunity], and they came back with comments,” McKinlay said. “It’s gone through the Treasure Coast Regional Planning Council. They came back not supporting this project. It has been vetted before us upon transmittal. I have grave concerns about adding additional large-scale developments in this part of the county at this time, and I think we need to hold off moving this project forward. I would request that we deny the postponement and take a vote on this today.”

Burdick noted that Department of Economic Opportunity, which rarely has provided comments on projects, has significant concerns.

“When Treasure Coast nearly unanimously opposes a project for a variety of reasons, I think we need to go back and take a look at it, and we need to bring a different project back, given the transportation and given the services that will be needed in the area,” Burdick said.

Abrams’ motion to postpone carried 4-2, with Burdick and McKinlay opposed.