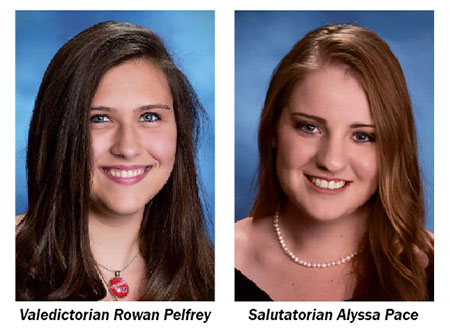 Seminole Ridge High School will officially graduate the Class of 2017 on Monday, May 22 at noon when 515 seniors cross the stage at the South Florida Fairgrounds, representing four long years of hard work and dedication.

Principal James Campbell is looking forward to seeing another set of students graduate.

“It is always the culminating point of the year,” he said. “It’s always the biggest event we have during the school year, and this is the one I enjoy, personally, the most. There’s no experience like seeing the students’ faces when they come across the stage.”

The school’s graduation rate has been increasing each year, he said, with the school’s highest being this year at 92 percent. He hopes to raise it to 94 percent next year.

“It would be a tremendous, tremendous percentage for us, and it is a big source of pride when you look at a student,” Campbell said. “They started in ninth grade and they complete all four years with you, without all of the different things that can occur during that time frame, not getting in the way and not diverting from the path.”

Another source of pride for the school is Valedictorian Rowan Pelfrey and Salutatorian Alyssa Pace.

For Pelfrey, learning that she was first in the class was a two-year process.

The final news came early in 2017 that she had held the top spot through the final stretch.

“I just wanted to be the best that I could,” she said.

Pelfrey wanted to be in the top of her class, and when she saw the goal was obtainable, she worked hard to achieve it. Learning that she was officially the first in the class took a weight off her shoulders.

Her parents are proud of her accomplishment, including the 4.0 GPA that earned her the valedictorian title.

Pelfrey, who is involved with choir and theater, will attend the University of North Florida for musical theater. She is collaborating with band student Jake Krates, who wrote music to accompany Pelfrey’s lyrics that she will be singing during her graduation speech.

Her fondest memory in high school, she said, is the shared times she had with her friends in theater and choir. “We have similar interests, and we all have been through the same events,” she said.

At UNF, Pelfrey will be double-majoring in musical theater and history. “I’d love to be a professional actor,” she said.

Additionally, she is interested in dramaturgy, which involves the research behind a professional show to ensure it is properly put together.

For anyone aspiring to reach the top ranks of their class, Pelfrey stresses the need to work hard.

“Everybody wants time off, but you really have to put that first. Business first, and then you can have fun,” she said, noting that she was able to have fun as well.

She suggests taking as many high-level college classes as possible, and working to do a good job in those classes rather than taking them just to take them.

“Really put the effort in, because that makes the difference,” Pelfrey said.

Pace will join Pelfrey on stage as salutatorian.

Pace was on a field trip the day the top 10 students in the class were called to the office. When she returned, she was told by one of the school’s guidance counselors.

“I was excited,” she said. “I worked really, really hard, not only this year, but all of my years of high school to take rigorous courses and keep my grades up. At one point, I was taking nine classes this year, just to maintain my grade point average not only to be in the top 10, but for the possibility of being valedictorian or salutatorian. That was the moment that I knew that all of my work and all of my studying and efforts had really paid off.”

Pace’s parents were extremely proud of her for reaching her goal, especially after watching her study and put forth such dedication.

During graduation, Pace will present a speech, which she is still working on. “I’d like to talk to my high school experience as a whole,” she said.

Speaking in front of her peers, the students she has spent the past four years with, is something Pace is looking forward to.

Her fondest high school memory was the first day of her AP calculus class. On the first day, her teacher had the students race down the halls in office chairs to calculate the speed and the distance.

“That’s something that I’ll always remember. I thought was extremely unique,” Pace said. “It caught my attention right away, and it ended up having a huge impact on me and leading me to pursue more math classes. Now I’m going to major in biomedical engineering.”

Pace will be attending the University of Florida. Eventually, she’d like to attend medical school and become a surgeon.

For students looking to rank high in their class, Pace encourages them to set goals.

“When you set a goal, let that be your motivation. Let that motivate you to do the work that is required to achieve your goal,” she said.

There are sacrifices that she made along the way, such as prioritizing taking more classes over having more free time to spend with friends and family.

“I had to miss out on some nights of fun, going out, to stay back and do some homework, but keeping my ultimate goal in mind, I let that motivate me through the hard times when maybe it was difficult to see the goal,” Pace said. “Keep the big picture in mind, because eventually, your hard work does pay off.”