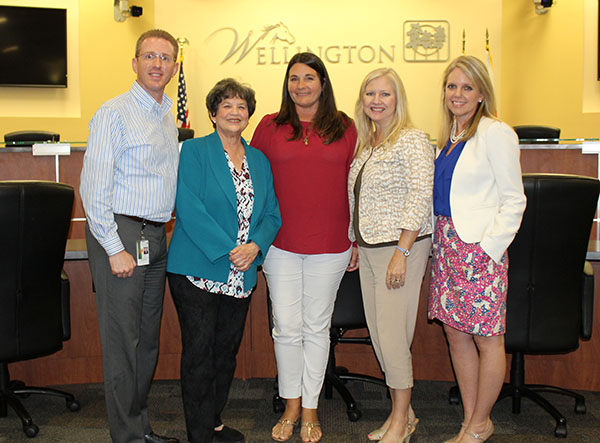 Frankel, who has represented the Wellington area in the U.S. House of Representatives since a court-ordered redistricting last year, stood in front of a packed council chamber for an hour and a half without pause.

“I love local government, and your local government does a great job,” said Frankel, who served two terms as mayor of West Palm Beach before making the jump to Washington, D.C. “This is a beautiful community, and I know you all feel very blessed.”

Wellington Mayor Anne Gerwig was happy to host the congresswoman. “We’re always happy to host a U.S. congresswoman and talk about issues that are relevant to our community, and I’m proud of most of the conduct of tonight and for the conversation,” Gerwig said. “If we don’t talk to each other, we can’t solve problems.”

Frankel focused on healthcare and, in particular, the bill that recently passed in the U.S. House of Representatives and is up for consideration by the U.S. Senate.

“The bad news is, obviously, it’s a monstrosity of a bill that just passed the other day,” Frankel said. “The good news is, hopefully, the Senate isn’t going to take this thing up.”

Frankel, like every Democrat in the U.S. House of Representatives, voted no on the current bill. She sees positives in the existing Affordable Care Act, also known as Obamacare.

She mentioned that she supports marijuana for medicinal purposes in the state. A constitutional amendment allowing medical marijuana in Florida passed last year.

Palm Beach County Vice Mayor Melissa McKinlay stood at the front of the hall with Frankel. She thanked Frankel for her work fighting drug abuse and addiction, which has become a signature issue for McKinlay.

“I would like everyone to know that Congresswoman Frankel was one of the first members of Congress to speak out in public on the opioid crisis,” McKinlay said. “Along with the congresswoman’s pressure, and pressure from local officials, we finally got the governor to declare that the opioid crisis is a public health crisis in the State of Florida.”

The town hall meeting featured many mixed emotions and differences of opinion among the people who were present. As a Democrat, and the representative of the people she stood before, Frankel listened and gave her own feedback to those who were voicing their concerns through questions on notecards and from verbal questions and comments during the evening.

“I know a lot of you are feeling anxious,” Frankel said. “This is really a forum for me to answer you if you have any questions.”

There was much conversation regarding Donald Trump’s presidency, and there was talk about the concerns for climate change, especially as it affects South Florida.

One of the major focuses shone light on the public’s distaste for the lack of bipartisanship in Congress. Most people said bipartisan cooperation has been missing for a long time and still continues to be absent now.

“We should work together in a bipartisan way to improve life for Americans,” Frankel said. “I, for one, am willing to do that.”

The crowd of people continued to be involved throughout the meeting, and at times made it hard for Frankel to give clear and concise feedback to questions or concerns. She still managed to stay poised, and continued answering questions.

There was a point when a resident was spoken to by the Palm Beach County sheriff’s deputy who was present, but, in general, peace prevailed.

For the most part, people in the room who wanted to speak talked about public issues in the state that upset them. That included immigration laws and how to handle people who are in the county illegally, particularly those who work in Florida and may commit crimes in the state. There were many opposing views on the topic.

Frankel made a point that although it is necessary to have a standard for those who are here in the country illegally, there must be a practical recourse for dealing with the approximately 11 million people in the U.S. who are currently deemed “illegal aliens.”

“We have to figure a practical, humane way to deal with that situation,” Frankel said. “Our economy has relied tremendously [on immigrant labor]. We have businesses that are employing millions of these people, and you’re eating food every day that they’ve picked.”

“It is always great to see the citizens and their elected representatives have an in-depth interaction like we saw tonight,” McGovern said. “The council chamber was filled. Nothing was off limits. The congresswoman took every question, and that is what’s best about local, on-the-ground interaction between elected officials and the citizens they represent.”

Before her eight years as mayor of West Palm Beach, Frankel served 14 years in the Florida House of Representatives. During much of that time, she represented the western communities in Tallahassee.

When the meeting came to a close, people were still raising questions and concerns. Frankel wanted to make one thing clear to everyone in the room.

“Use your energy in a good, constructive way, and just be proud that we can do it, and be proud that we are Americans,” Frankel said. “Keep going. Despite the fact that we had differences in opinions, we had no fighting, no physical fighting, and we had people here with very strong convictions, which is good.”

For more information about Frankel, visit www.frankel.house.gov. To contact her local office, call (561) 998-9045.