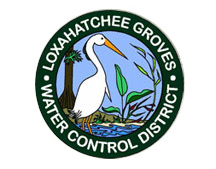 On Monday, Nov. 14, the Loxahatchee Groves Water Control District Board of Supervisors approved several items anticipating the district’s transition to becoming dependent to the town.

A local bill sponsored by State Rep. Matt Willhite (D-District 86) was approved last month by the Palm Beach County Legislative Delegation and is on its way through the state legislature. The transition depends on the approval of a future referendum, possibly in March.

During public comment at the start of the meeting, Loxahatchee Groves Vice Mayor Ron Jarriel urged the board to hold onto its usable road maintenance equipment, pointing out that he and Councilman Dave DeMarois had voted not to accept the remaining district roads due to their bad condition.

“I’m here tonight because you have a supervisor or two who have a tendency to say that the roads that you turned over to the town are deplorable and inexcusable, and I agree with you 100 percent,” Jarriel said. “We… knew, and I believe you knew, that those roads would become more deplorable than they were.”

Jarriel, a former LGWCD supervisor, said the district should keep its usable road equipment, as the board has discussed, and was scheduled to discuss again that night.

In other business, the board approved an amended budget for fiscal year 2017 showing a deficit related to a professional services cost overage from undertaking initiatives associated with the Bank United loan that was used to finance paving with open-graded emulsified mix (OGEM); preparing quit claim deeds and resolutions of acceptance for district roads; reviewing legal descriptions associated with conveying roads; responding to a legal complaint and a summons; and reviewing easements proposed by Palm Beach State College. There also was a cost overage due to maintenance of road graders and water trucks.

LGWCD Administrator Steve Yohe said the deadline for approving the past year’s budget is Nov. 30. It does not include $15,254 in gas tax owed by the town or an $8,950 reimbursement for the town’s 50 percent share of the cost of road survey work for quit claim deeds.

LGWCD President Anita Kane said that in the worst case, “our reserves are down to $120,000, which is well below what Grau & Associates says we need to have.”

Yohe said the figures are acceptable because they are the best estimates at this point, and the following year shows the reserves being replenished by $75,000, and in the next fiscal year, the district will have paid off $90,000 on equipment that was financed five years ago.

Yohe also pointed out that legal services far exceeded what is reflected in the amended budget, but that the district’s legal firm, Caldwell & Pacetti, forgave $35,000.

Supervisor Simon Fernandez made a motion to approve the amended budget, which carried 4-0 with Supervisor Karen Piesley absent.

The board also approved a one-year extension for Grau & Associates for auditing services with a 2.2 percent increase on its current bill of $13,600.

Yohe pointed out that the firm has provided auditing services since fiscal year 2006, with an annual average increase of 3 percent, and has valuable historical knowledge. He recommended retaining the firm. “The cost for this is reasonable,” he said.

Supervisor Laura Danowski asked if it is normal to retain a firm for that long without going out for bids, and Yohe said that in the case of an auditing firm, it is acceptable as long as they perform their job.

“At this point in time, I wouldn’t recommend changing course… given that we’re moving to become a dependent district,” he said. “This is your institutional memory, and you want to keep those people who have been here the longest as you make this major step forward.”

Kane agreed, adding that “ultimately, it is the citizens who will decide,” and that if the referendum fails and the district remains independent, she would like to go out for bids.

“I’m not saying that we would switch,” she said. “I just think it’s prudent to take a look at whoever’s out there.”

Supervisor Connie Bell urged staff to move forward getting records scanned and filed electronically, regardless of whether the district becomes dependent.

“We need to be good neighbors… and try to get all the paperwork we can in order and in files, because somebody’s going to have to absorb all of that in the future,” she said. “We still have to do business every day and move forward.”

Fernandez made a motion to approve the one-year extension, which carried 4-0.

The board also discussed the auction of surplus equipment, including the district’s only serviceable grader and water truck.

Yohe said he had been in contact with several auctioneers who offered variable terms. He added that there are other options, such as advertising in heavy equipment magazines, pointing out that the district sold a pump several years ago to a South American nation for $20,000.

Bell said someone asked at the last Loxahatchee Groves Town Council meeting why the district could not transfer some of the serviceable equipment to the town, since the taxpayers had already paid for it, although the two still are separate.

Bell added that from watching council meetings, she heard comments indicating some members don’t believe the district is trying to work with them to make an easy transition.

“To address that, I would like to have an answer to give them,” she said.

Danowski said she would be concerned about liability for the equipment if the district ceded it to the town and the town left it at the district compound.

Fernandez pointed out that the district has an emergency generator that the town might use to power its office, which sat dark after Hurricane Irma.

During public comment, Jarriel said he favored getting rid of the equipment that the district doesn’t need, but reiterated his suggestion.

“We are two entities in the same town,” he said. “If you become dependent to the town… you will become our public utility, and I do believe we will find a way to use the equipment. I hope we can get the referendum going in March.”

Kane said direction had been given to have their legal questions answered by the December meeting, and hoped to have answers from the council by then as to what it would like to do.

The board also discussed putting out a request for qualifications for a forensic audit of the $2.6 million bank loan that was used to pay for OGEM paving, after members threw out unsatisfactory requests for proposals last month. The purpose of the audit was to assure a smooth transition of ownership to the town.

LGWCD Attorney Frank Palin said he planned to get a new request for proposals on the district’s December agenda.

The board also approved extending its Erdman Anthony engineering contract for one year.

Yohe pointed out that Erdman Anthony has provided engineering services to the district since 1996, and given its institutional memory, he recommended extending the contract one year, explaining that Palin had prepared a contract form.

Kane said the question would not stop Willhite from presenting the district’s local bill, but felt it should be resolved.

Bell made a motion to approve the one-year extension, which carried 4-0.

During supervisor comments, Kane thanked residents for coming to the board meetings but said she was troubled that fighting between the LGWCD board and the town council continues.

“It kind of pains me a little bit that there is continued animosity between the town council and this board,” she said. “I think that we’re working very hard to clean up a lot of those things and work together, so I’m hoping that we can continue to make positive progress and grow the town together in a responsible fashion.”