On Thursday, Nov. 1, the Royal Palm Beach Village Council presented Parks & Recreation Director Lou Recchio with an award in recognition for his 25 years of service to the village providing high-quality recreational opportunities for residents. Recchio later returned the favor by presenting the council with the first reading of amended parks regulations that he said will ensure better access to village recreational facilities.

About a dozen family and friends came out last week to congratulate Recchio as he received a plaque from Mayor Fred Pinto attesting to his 25 years of service.

“Lou has worked hard to make Royal Palm Beach recreation the premier program in the county,” Pinto said. “He is a dedicated leader, a good manager and a good friend. His department and its success are a reflection of his greatness. Lou, you are an asset to the village and a good man. We want 25 more years of your service.”

Jimmy Wicker, who also works in the Parks & Recreation Department, was presented with a 10-year service award.

Recchio later led the council on a discussion regarding the first reading of a new ordinance amending the village’s parks and recreation rules by adding a new time limit on certain facilities while players are waiting and imposing requirements that all coaches using village facilities to teach for a fee must register in advance with Royal Palm Beach.

“Private citizens conducting coaching for hire using village tennis courts, the golf driving range and batting cages are becoming more and more of a problem,” Recchio explained. “This new ordinance gives us some teeth; something to back us up in response to those who monopolize recreational facilities to the detriment of residents.”

The new ordinance will limit use of popular park facilities, such as tennis courts, to one hour when people are waiting to play. Sign-in sheets will be provided as a way to manage playing times and playing orders.

The ordinance will also require that coaches-for-hire register with the village and rent out village facilities while using them for business.

The ordinance does not apply to parents teaching their children or friends, and it is limited only to situations where coaches are charging the public for lessons on village property.

Recchio said that it is becoming more common for unregistered golf, tennis and other instructors to approach people at village parks to offer commercial services.

This was confirmed by La Mancha resident Dan Swanson.

“I was at the driving range with my grandson, when this guy came up, identified himself as a golf pro, and offered golf lessons for my grandson at the Commons Park driving range for a fee,” Swanson said.

The new ordinance will have fines and give the village the ability to collect legal fees because citations will be brought before the county court.

“We need to level the playing field,” Village Attorney Jennifer Ashton Gardner said. “The village currently vets coaches and instructors and, when appropriate, requires that they carry liability insurance. We have no idea of the qualifications of these unregistered coaches for hire who may pose a liability threat to the village.”

• The council conducted the first public reading of its new landscape ordinance and tweaked its language so as not to impose any undue requirements on residents who lose trees to named windstorms where the village declares a state of emergency.

In those cases, even trees of particular importance to the village, called specimen trees, will only need to be replaced one for one. The new ordinance requires up to six trees replace the largest and most mature specimen trees. The second and final reading will take place in December. Then the village and its new arborist consultant will embark on a six-month program of public education regarding the first major update to the landscape code since 2001.

• Two La Mancha residents, Dan Swanson and Jesse Slick, came to the microphone during public comments on non-agenda items to voice their displeasure over a developer’s plans to redevelop the southern portion of the Village Golf Club, which faces their backyards. Council members did not comment. No official application has been made to the village regarding the proposal.

• Lastly, with the final reading of its amended animals for sale ordinance, and with the closure of the only puppy store in the community, it is now no longer permitted to sell cats or dogs at any retail establishment within the Village of Royal Palm Beach. 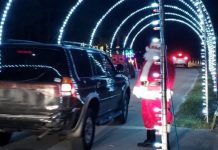