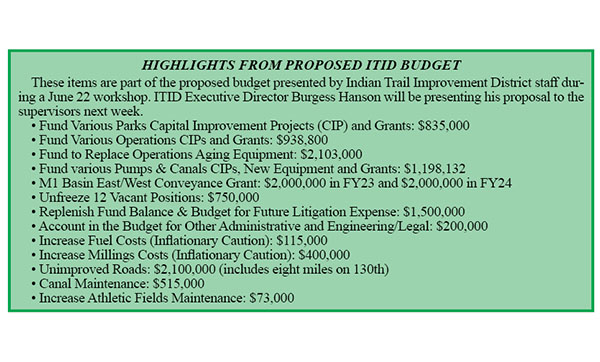 The Indian Trail Improvement District’s budget for fiscal year 2022-23 could nearly double to $24.3 million under a “wish list” proposal presented by staff to the ITID Board of Supervisors at a Wednesday, June 22 workshop meeting.

However, the budget is likely to be pared down before the final spending plan is approved.

“I’d like to be driving a Mercedes, too. But these are taxpayer dollars, and we need to figure out ways to make these dollars spread a little bit further,” said ITID Vice President Betty Argue, specifically referring to a $2.1 million proposal to purchase new road and canal cleaning equipment and several new pickups. “We need to make do with what we have where we can.”

ITID’s 2021-22 budget was $12.5 million with an average per-acre assessment of $600. Next year’s staff proposal suggested an $11.7 million increase. Since each $50 per acre/district-wide assessment generates approximately $1 million for ITID’s coffers, a $600 per acre increase would be necessary to fully fund the proposal. That does not include the $53 per acre assessment in some of the district’s units to fund the R3 road program.

“While I agree this [proposed increase] is astronomical, residents have been asking for all this [road and canal] work, and it can’t be done for nothing,” said Supervisor Jennifer Hager, who is not seeking re-election this year after 12 years on the board. “Repairing all this infrastructure, paving this and milling that… It doesn’t happen for free.”

Supervisor Keith Jordano said he did not want to see residents pay more in assessments but added that supervisors need to stop kicking infrastructure and other major projects down the road.

With costs increasing rapidly, the same work could cost much more several years from now. “Residents will appreciate if we bit the bullet today for what it will save them in the future,” Jordano said.

Argue said that tough decisions will need to be made.

“No one in the district, no matter what they’ve asked for, is going to want to pay double while their taxes also are going up with [Palm Beach County],” she said. “So, we need to look at a cheaper way of moving forward.”

That could be done by paring back some of the proposed equipment purchases.

“Maybe we can cut two million to one million,” Argue said. “If we can do that in several places, then we can put ourselves in a better place until next year.”

That process already is well underway, ITID Executive Director Burgess Hanson said in an interview several days after the workshop.

“I’ll be giving my executive director’s budget proposal to the supervisors [next week], and it will be considerably less than what was proposed during the workshop,” he said, while insisting that the staff proposal was not full of unnecessary expenses. “It’s mostly hard, in-the-ground infrastructure projects.”

Little money was spent on adding to or repairing ITID infrastructure during the previous decade, Hanson said, and now repairs and improvements have become essential. “Much of the needed work on pump stations and other district maintenance has been put off for five years,” he said.

In any case, the theoretical $11.7 million increase is not what it sounds like, Hanson noted. Much of that number reflects ITID putting in money up front in order to receive state and/or federal grants that will cut the actual cost in half and may be spread out over several years.

For instance, ITID is in line to receive a 50 percent grant for reclamation work on what is known as the M1 Basin East/West Conveyance Canal, Hanson said. The district will have to front the money for the $4 million project, but it will get $2 million back when it’s completed.

The same is true for repairs and improvements to fencing, footing and more at the Nicole Hornstein Equestrian Park on Hamlin Blvd. The district could spend up to $800,000 and get $400,000 back in grant money. “That doesn’t mean we have to spend $800,000,” Hanson noted. “We can spend less.”

And while some solutions seem obvious on the surface, such as leasing mowing equipment and even pickups rather than purchasing them, Hanson said he and his staff have run the numbers and leasing such items would cost the district $813,000 more over several years.

Hanson said it also is important for residents to understand that ITID operates completely under a benefit-assessed/per-acre system in which property owners are literally paying for what they get in district services. Unlike value-based ad valorem taxes, the assessment rate has nothing to do with the county’s skyrocketing home prices.

Property owners may be assessed for several years for a project in their neighborhood, but once that project is completed and paid off, the assessment ends, Hanson noted.

A public hearing on the proposed budget will be held Wednesday, July 20.