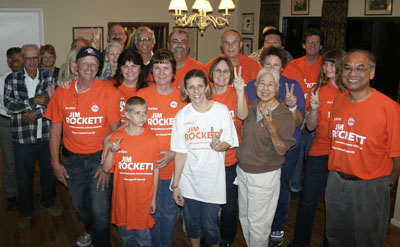 McLendon’s campaign had centered on what he said was the council’s non-responsiveness to the public, in particular, demanding a referendum on Palm Beach State College’s planned campus on Southern Blvd. The bitter campaign included accusations from both sides that their opponents were spreading misinformation.

“I congratulate all the voters who came out,” Rockett said. “We had quite a turnout.”

Rockett said he was especially thankful for the support of his campaign team. “They worked tirelessly in support of my re-election,” he said. “Nobody relaxed; nobody thought it was going to be an easy thing.”

Rockett said he felt the turnout reflected that residents realize the benefit of his dedication to the well-being of the town. “I look at it as a victory for the entire town, not just those who voted for me,” he said, adding that he was disappointed by the nasty nature of the campaign against him.

“The campaign demonstrated probably the real difference between myself and Mr. McLendon, that my first and foremost concern in serving on the council is what’s best for the town,” Rockett said. “I really believe that Mr. McLendon demonstrated by his actions his personal ambition to be elected to the council, and showed a complete disregard for the good of the town. But we’ve got it behind us, and a win is a win.”

Rockett said he plans to look for things that the council can do better. “Obviously there are some questions that need to be answered,” he said. “People need the facts on it, and we will try to get [the truth] to them.”

Rockett said he tried to get his message out through his web site, www.jimrockett.com.

“They’ve heard what I’ve done, and they were looking for what my opponent has done or what they can do, and what they kept getting was lies and misconceptions that he wanted to portray,” Rockett said. “It was not about him; it was about me, and only negative. I understand that’s part of campaigning, but it hasn’t been this low, ever, that I can recall. We need to move forward because this has been destructive. It’s not good for the town.”

Rockett said he wants to get information out to the public that is factual. “There are things that were out there that we need to make sure it’s clear what they really represent,” he said. “One of the things I heard from a couple of people was the money that was in budget for the town hall.”

He said the $1.5 million budgeted for a town hall is a tentative figure to hold a place in the capital budget, but that the council has no intention of spending such a figure on the project.

Rockett also pointed out that he has mentioned property owned by the school board designated for a transmission tower that the town might be able to share for a meeting hall. “Maybe we can have some sort of inexpensive lease agreement,” he said. “But we’re definitely not going to spend a million and a half on a town hall. That’s a lot of money, and we have a lot of other uses for it than a town hall.”

Rockett explained that the nursery owners operate more in a cooperative manner than competitively.

“People who would make an accusation like that don’t know me, and they don’t know the nursery business down here,” he said. “I certainly wouldn’t be trying to keep competition down, which I think was the allegation. We encourage competition.”

McLendon said he was satisfied with the number of people who turned out to vote and that he lost by just 30 votes when he was opposed by four sitting council members and a county commissioner.

“Each one of those people brought 60 or 70 voters,” McLendon said. “It was simple for them to do what they did.”

McLendon said it has been a hard couple of months with both the election and the petition drive.

“It was a lot of work,” he said. “I had three or four people on my team where they probably had 15 or 20 people. The odds were stacked against me, so to get where I got is pretty impressive.”

Although Rockett accused McLendon of misrepresenting the facts, he said it was Rockett who was misleading voters, saying they would face a $4.5 million lawsuit from the college if the referendum forces the council to repeal its approval of the campus.

“I stated things about Rockett that were very obvious,” McLendon said. “He doesn’t listen to the people. He has his own agenda. He’s turned in people for code enforcement that he violates himself. They’ve approved 200 acres of commercial development in Loxahatchee Groves in the past two years. That’s unprecedented in Loxahatchee Groves.”