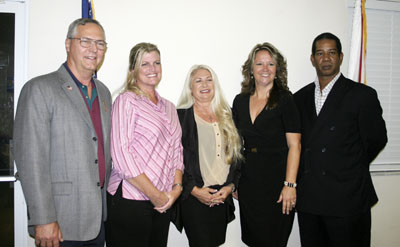 The Indian Trail Improvement District Board of Supervisors approved a motion Wednesday opposing Minto West’s plan to build up to 6,500 homes and 1.4 million square feet of non-residential space on the 3,900-acre former Callery-Judge Grove property.

Minto Communities Florida recently purchased the property for $51 million. The land, off Seminole Pratt Whitney Road, has current approvals for up to 2,996 homes and up to 235,000 square feet of non-residential uses.

ITID President Carol Jacobs said the firm the district had hired to do an analysis of Minto West’s impact was not prepared to make a presentation at Wednesday’s meeting. “We’re going to have a full discussion at May’s meeting,” Jacobs said.

Supervisor Gary Dunkley said he thought the board should take a stand now, although it has no jurisdiction over the property other than possible impacts on the district’s drainage and road systems.

“I’m not against development,” Dunkley said. “I’m not against Minto, but I think I am against the current application that Minto has put in. That would impact us as a community in terms of traffic.”

Jacobs reiterated that ITID had hired a group to research the Minto West project. She pointed out that attorney Marty Perry, who is part of ITID’s consulting group on the Minto West issue, was not at the meeting. She took issue with the fact that Dunkley seemed to have more information regarding the group’s research.

“All the board members needed to have individual meetings with the group, so we cannot really vote on this tonight,” Jacobs said. “It’s not fair, even though you’re probably going to get the vote. We’re probably going to be all the same, but we still need to respect that we paid money to hire a group to give us this information, and none of us have it except you.”

Dunkley said he didn’t have all the information, either. “I’m just saying the application they have for 6,500 homes has an impact on us,” he said. “It has nothing to do with the workshop. The reason I went to the [consulting group’s] workshop is because I’m the newest person on this board. For me to make a decision, I have to understand the decision I’m making.”

ITID Attorney Mary Viator said she and the consultants had met with county staff on Tuesday to review what possible impact the application might have on the district. “What we are looking at is those areas that impact the infrastructure of the Indian Trail Improvement District, not whether they get certain densities,” Viator said. “We were trying to update the board members to be able to speak with you all candidly, and in the near future, we’re trying to set up those meetings so all the board members can have the benefit of what has been discussed.”

“The planning commission meeting is procedural,” he said. “It starts the clock, and [staff] will have direction to start investing resources to pull all of their thoughts together in a written document that will be ready, from what we were told, no later than the middle of May. The actual formal public hearings on both the comprehensive plan amendments and the rezonings will go on at a later date.”

He noted that the full planning schedule can be found on the Palm Beach County web site at www.pbcgov.com.

Supervisor Michelle Damone said she would prefer not to take a formal position without all the information.

Supervisor Jennifer Hager supported Dunkley’s position that the board should oppose the Minto West application immediately. “I’m there with him on that,” she said. “He’s not saying ‘no’ to development. He’s saying ‘no’ to the current application.”

Supervisor Ralph Bair said he had made his position clear that he only supported the original approvals for the land.

“I’m basically holding the line on what they were originally granted, not what their application is for. That is my position, and I don’t want any more connections to our roads than there absolutely has to be,” he said.

Dunkley made a motion to oppose the Minto West application, which carried 4-1, with Damone opposed.

In other business, Jacobs said there will be a grand opening of the completed Hamlin House at Nicole Hornstein Equestrian Park on Friday, April 18 from 6 to 9 p.m. “There’ll be food and entertainment,” she said. “I’d like to see you all there. It’ll be nice.”